How one brokerage helped out a competitor during ‘biblical’ flooding

Recent flooding in Grand Forks, B.C. has not only brought a community together, it has brought two local competing brokerages together as well.

Sam Cowan, vice president of sales and marketing with RHC Insurance Brokers Ltd., said that the brokerage’s office in Grand Forks was shut down for several days after a power outage. However, RHC’s competitor, Dave Dale Insurance Agencies Ltd., wasn’t as lucky – their basement flooded and they had to set up a temporary location. 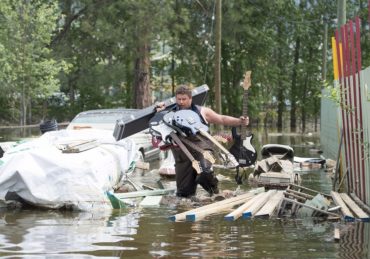 Resident Lars Androsoff carries his friend’s guitars as he walks through the floodwaters in Grand Forks, B.C., on Thursday, May 17, 2018. THE CANADIAN PRESS/Jonathan Hayward

“We went up there right away and said, ‘Hey, do you need any help?’ and made sure his customers knew where he was,” Cowan said in an interview with Canadian Underwriter Tuesday.

The Canadian Press has called the flooding “catastrophic.” For Cowan, he remembers driving over a highway bridge and seeing two or three feet of water hitting the bottom door of his truck. “All it looked like was half the downtown with a river and you could see the water moving past you,” he said. “The downtown was completely shut off except for one street,” he said, adding that no commerce has been going on in the community for about two weeks.

On the day of the incident, Cowan had a staff meeting and remembers a co-worker saying “the river’s going to have to come up four or five feet before it gets close to my house. The next day, Thursday morning [May 10]… I’m on the after-hours claims line and my phone started going crazy because the river did go up that much.”

Cowan said some homes didn’t have access to roadways, requiring search-and-rescue teams to retrieve people with boats. “There was a levee that broke near town as well that contributed to a bunch of the flooding in the south and part of the north end of town,” he said. “It was biblical. It took everyone by surprise.”

Cowan estimated that the brokerage has had more than 120 residential claims so far. It’s also possible the event will be considered a cat, meaning more than $25 million in claims.

As with other jurisdictions, overland flood coverage has been a confusing and frustrating experience for many. For example, some clients qualify for coverage, but only partially. Others don’t qualify. Others still apply, but are subjected to policy limits. Some have a $2,000 deductible, some have a $100,000 deductible; other customers may have a seasonal or rental property that doesn’t qualify for overland flood coverage or disaster financial assistance.

“It’s everywhere in between,” Cowan said. “It’s a real mess trying to figure it out. We knew this was probably the worst-case scenario for any kind of cat loss.”

Cowan said that with the floodwaters receding and evacuation orders being lifted, restoration companies are starting to gain access to homes. However, “the downtown is completely vacant for the most part,” he added.

The Canadian Press reported Tuesday that residents of more than 500 properties across B.C. remained out of their home, and another 6,500 were on evacuation alert (drones were being used to re-evaluate evacuation alerts). Evacuation orders from about 170 addresses in Grand Forks were lifted Tuesday.