Ontario has become the fourth province in Canada to approve the use of electronic proof of auto insurance (EPAI) for drivers, effective immediately. 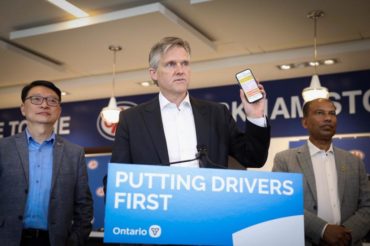 Speaking at a press conference at a CAA South Central Ontario store in Markham, Phillips said there will be a one-year phase-in period, during which time insurers will continue to issue paper versions as well as electronic versions for customers that request that option.

“This period will also [allow] consumers, regulators, insurers and law enforcement – all groups that we’ve consulted with extensively on this – [to] see if there are any changes that are necessary to make this program better,” Phillips said during the press conference. “Rummaging through your [glove compartment] for your little pink slip is not something that should be necessary in 2019.”

The electronic pink slips in Ontario will feature “sophisticated safeguards,” Phillips said. “They can’t be edited or altered. Features cannot be included to enable anyone to track your location or collect, use or disclose your data without explicit permission from you.”

The approval of electronic pink slips in Ontario was a long time coming.

As early as December 2015, Fasken Martineau DuMoulin LLP and the Centre for Study of Insurance Operations (CSIO) advocated for EPAI in the eSlips Advisory Report: E-Delivery of Motor Vehicle Insurance Cards. In the wake of that report, the Canadian Council of Insurance Regulators launched consultations in the spring and summer of 2016 regarding the adoption of EPAI.

In the interim, some brokers were already offering versions of EPAI, even though Ontario had not yet created a regulatory framework for them. CSIO had an industry-based solution ready to launch in June 2017.

After Nova Scotia approved EPAI in January 2018, Canadian Underwriter approached the provincial regulator – the Financial Services Commission of Ontario, and now the Financial Services Regulatory Authority of Ontario – for regular updates on the EPAI file. When last contacted in early August, FSRA said that it was continuing “to work with the government and stakeholders to enable the use of electronic pink cards for consumers. We have no further updates at this time.”

Ontario’s budget in April 2019 indicated that it would bring EPAI to Ontario drivers and allow for “more competition in the auto insurance market.” Earlier this year, the government commissioned a poll of Ontarians about ways to make auto insurance more accessible, more affordable and more convenient, Phillips said. Fifty-one thousand people provided comments, including 68% who said that they believe insurers needed to provide them with more options in terms of online and digital tools.

Phillips said the government needed to work with insurers, consumer groups such as CAA, law enforcement, and officials and experts in privacy. It also consulted with the other provinces that approved EPAI. “It took us that time to make sure it would be done right.”

Insurance Bureau of Canada welcomed the news. “Being able to provide digital documents to today’s tech-savvy consumer is a baseline expectation of service we are thrilled to now be able to provide,” Kim Donaldson, vice president of IBC’s Ontario region, said in a press release. Most U.S. states also allow digital proof of insurance, “and we anticipate more provinces will follow suit in the near future.”

Canada’s largest insurer, Intact, announced Thursday an enhanced digital proof of insurance (pink card) on the Intact Insurance and belairdirect apps. The digital pink card can be used in Quebec, Alberta, Newfoundland and Labrador, and Nova Scotia, and “in Ontario following review of the regulations released today,” Intact said.

Aviva Canada, Canada’s second-largest insurer, applauded the government’s decision to approve the use of electronic pink slips and talked of moving onto the next phase. “We continue to meet with other governments and regulators in order to advance eSlips approval in their provinces,” said Phil Gibson, managing director of personal insurance at Aviva Canada.

“Offering a paperless option is the next step in modernizing the auto insurance industry and a move welcomed by CAA and its members,” said Matthew Turack, president of CAA Insurance. “In a recent survey conducted for CAA Insurance, nearly two-thirds of respondents expressed interest in having access to electronic proof of their auto insurance coverage.”

Added CSIO president and CEO Catherine Smola: “The recent announcement of the Ontario government’s decision to approve the use of eSlips is what consumers have been waiting for and we are thrilled with this news. The benefits of eSlips are tremendous and now carriers and brokers can give their customers the experience they expect, allowing them to access their proof of insurance on their phones, anywhere, anytime.”