Burlington, Ont. will serve as the pilot site for Intact Centre on Climate Change’s (ICCA) Home Adaptation Assessment Program (HAAP), meant to enhance homeowner awareness of how to reduce flood-related damage and limit the level of losses seen during events like the storm that hit the community two years ago. 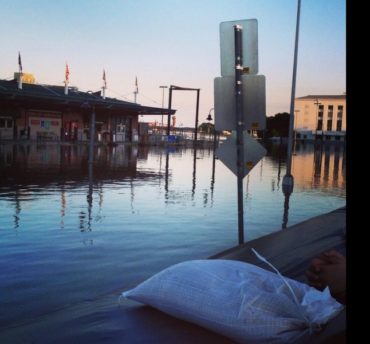 Burlington was the site of an August 2014 storm that caused substantial residential flooding. Photo: @PJH1964.

Burlington – the site of an August 2014 storm that caused substantial residential flooding ­– will serve as the inaugural community in the first large-scale basement-flood risk reduction program.

Ontario’s Ministry of the Environment and Climate Change is investing $237,000 in the project to help Burlington homeowners reduce the risk of basement flooding from severe weather events associated with climate change, notes a statement issued last week by the city and the ICCA.

As a joint pilot among the provincial government, the ICCA, the City of Burlington and participating homeowners, city council has further approved contributing another $50,000 the first year, with opportunities to reassess in 2017.

“Lessons learned from the pilot program in Burlington will inform a broader rollout of the program across Ontario,” the statement points out.

HAAP will do the following:

Climate change “has damaged the environment and has caused extreme weather events, such as flooding, which can damage basements and homes and increase insurance rates,” notes the joint statement.

“Because of climate change, we can expect more severe weather events like this. Thanks to the province’s support, homeowners in our area will be able to reduce their risk of basement flooding and minimize damage in the event of another flood,” McMahon adds in the statement.

Since the flooding, says Burlington Mayor Rick Goldring, the city and Halton Region have committed significant funding for short-term and long-term flood mitigation initiatives. “The investment in this pilot project to help homeowners prevent damage to their properties is representative of our ongoing commitment to decrease the impact of severe weather on our community,” Goldring says.

Dr. Blair Feltmate, head of the ICCA at the University of Waterloo, maintains that “overcoming the aftermath of extreme weather events is a shared responsibility between governments, homeowners and businesses.” HAAP “will provide homeowners with the practical information and support they need to protect their homes from the big storms of tomorrow,” Feltmate continues.

Additional protection is likely welcome. Flooding, Canada’s most common type of natural disaster, is expected to increase in frequency because of climate change.

As well, since 2004, the province has allocated more than $84 million to help people in 60 different municipalities recover from natural disasters.