TORONTO – An Ontario court has ruled that the Iranian military’s downing of a passenger jet early last year was an intentional act of terrorism, paving the way for relatives of those killed to seek compensation from the country.

In the decision, Ontario Superior Court Justice Edward Belobaba found on a balance of probabilities that the missiles that shot down Ukraine International Airlines Flight 752 on Jan. 8, 2020, were fired deliberately at a time when there was no armed conflict in the area.

As a result, he found it constituted an act of terrorism that would invalidate Iran’s immunity against civil litigation.

While the State Immunity Act protects foreign states from legal claims, the Justice for Victims of Terrorism Act provides an exception in cases where the losses are caused by terrorist activity, the ruling said.

More than 100 of the 176 people killed in the plane crash had ties to Canada, including 55 Canadian citizens and 30 permanent residents.

The lawsuit was filed last year by four people whose loved ones were killed in the attack. 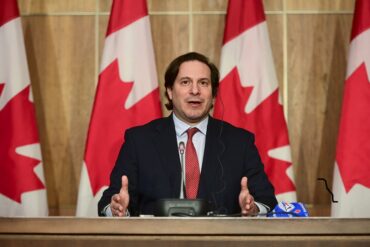 Marco Mendicino, Minister of Immigration, Refugees and Citizenship, announces measures of support to in-Canada families of victims of Ethiopian Airlines Flight 302 and Ukraine International Airlines Flight 752 during a press conference in Ottawa on Thursday, May 13, 2021. THE CANADIAN PRESS/Sean Kilpatrick

Merzhad Zarei lost his 18-year-old son, Arad, while Shahin Moghaddam lost his wife, Shakiba, and their son Rossitin, the document said. Ali Gorji lost his niece Poureh and her husband Arash, who were newlyweds, it said.

The fourth plaintiff, identified only as Jane Doe because she fears reprisals from Iran, had planned to be on the plane alongside her husband but couldn’t get a visa in time, the ruling said.

Lawyers representing the plaintiffs said the ruling is “unprecedented in Canadian law.”

“It is significant for the impact it will have on immediate surviving family members seeking justice,” Mark Arnold and Jonah Arnold said in a statement Thursday.

Iran was served with the claim through Global Affairs Canada in September, but failed to file a statement of defence and was found in default in December.

Normally, a defendant found in default is deemed to admit the truth of the allegations made in the statement of claim, but the protections under the State Immunity Act apply even to those found in default, Belobaba wrote. The plaintiffs must therefore still satisfy the court that the case can proceed under the legally established exceptions.

“The plaintiffs have established that the shooting down of Flight 752 by the defendants was an act of terrorism and constitutes ‘terrorist activity’ under the SIA, the JVTA and the provisions of the Criminal Code,” he wrote.

The judge relied on two expert reports — one by Ralph Goodale, Canada’s special adviser on the incident, and the other by the Special Rapporteur to the United Nations Human Rights Council — in determining that the missiles were fired intentionally.

He also relied on the UN report and other experts in finding there was no armed conflict in the region at the time.

In the immediate aftermath of the shootdown, Iran denied responsibility but acknowledged three days later that its paramilitary Revolutionary Guard mistakenly hit the Ukrainian jetliner with two surface-to-air missiles.

Preliminary reports released by Iranian authorities last year pointed to an air-defence operator who they said mistook the Boeing 737-800 for an American cruise missile.

Iran’s civil aviation body released a final report earlier this year that blamed “human error” for the firing of the missiles but named no one responsible.

Thursday’s ruling dealt only with liability. The judge said another hearing will be held regarding compensation.

Feature image: A mourner lights candles during a memorial for the anniversary of flight PS752 in Edmonton on Friday, January 8, 2021. THE CANADIAN PRESS/Jason Franson