Ontario’s community safety and correctional services minister is calling on “everyone interested” to comment on proposed changes to the Provincial Nuclear Emergency Response Plan. 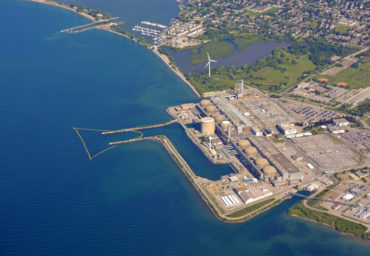 The province is home to the world’s largest nuclear operating facility, Bruce Power reports on its website of the power station at Douglas Point, on the shore of Lake Huron about 150 kilometres north of London.

“We are updating our Provincial Nuclear Emergency Response Plan this year to ensure that it reflects the most current technologies and facilities,” Community Safety and Correctional Services Marie-France Lalonde said May 18 in the legislature at Queen’s Park in Toronto.

“The proposed changes to the PNERP are now available for public comments for the first time, and it is crucial that everyone-affected groups, and everyone-comments, including the general public,” Lalonde said during Question Period. “I encourage everyone interested to comment on this important issue.”

The plan was posted to the Internet, starting May 15, “for 60 days to allow all interested parties to review the plan and provide comments,” the provincial government said in a press release.

Lalonde said May 18 that the province is “taking lessons learned from past nuclear emergencies such as the Fukushima accident.”

She was referring to the March, 2011 disaster at the Fukushima Daiichi nuclear power plant, which arose from the Tohoku earthquake, which measured about 9 on the Richter scale. Marsh U.K. reported earlier that insured losses, including life, were nearly US$36 billion while Aon Benfield reported economic losses of about US$217 billion.

Bruce Power “looked at Fukushima very closely,” said Frank Saunders,vice president of nuclear oversight and regulatory affairs at Bruce Power, in Ottawa in 2014 at the National Insurance Conference of Canada. Bruce Power simulated the effects of flooding, a large wave coming from the lake and a severe tornado, Saunders told NICC 2014 attendees at a lesson titled Lessons from Fukushima: Nuclear Risk in Canada.

A 1979 meltdown at the Three Mile Island nuclear power plant – on the Susquehanna River near Harrisburg, Pennsylvania – was the fifth largest man-made insured loss, as of early 2016, Swiss Re reported earlier. In its sigma report, Natural Catastrophes and Man-Made Disasters in 2015, Swiss Re said insured losses from Three Mile Island were US$1.4 billion, when adjusted for inflation to 2015. The four man-made losses that were more expensive were: the Sept. 11, 2001 hijacking by Al Qaeda of four civilian airliners; the July, 1988 Piper Alpha oil platform explosion; the August, 2015 explosion of a sodium cyanide warehouse at the Chinese port of Tianjin; and the October, 1989 explosion of a vapour cloud at a Phillips 66 chemical complex near Houston.

With the Three Mile Island accident, there were “small releases” of radioactive gases, according to a backgrounder published by the United States Nuclear Regulatory Commission.

“What a lot of people don’t understand about (Three Mile Island) is that is there was never any actual health implications of it,” Fogler Rubinoff environmental lawyer Stanley Berger told Canadian Underwriter in early 2015, adding that millions in claims from Three Mile Island arose from “preventative measures were taken to avoid the consequences of a nuclear incident.”

As recently as 2013, the Ontario government’s plan was for Pickering to remain in service until 2020 but in early 2016, the province approved Ontario Power Generation’s plan to “pursue continued operation of the Pickering Generating Station beyond 2020 up to 2024.”

During Question Period at Queen’s Park May 18, Lalonde said once the Ontario government receives public input on its draft updated nuclear response plan, a “newly established expert advisory committee made up of top nuclear experts from around the world-national and international-will provide recommendations based on the feedback that we are receiving.”

Outside of Ontario, the only Canadian nuclear power plant generating electricity for the public is at Point Lepreau, on the Bay of Fundy about 50 kilometres west of Saint John, New Brunswick. Hydro Quebec’s Gentilly plant on the St. Lawrence River stopped providing electricity in 2012.

The federal Nuclear Liability and Compensation Act, which was passed into law by the Conservative government before the Liberals were elected in 2015, stipulates that nuclear power plant operators are responsible for up to $650 million in civil damages resulting from accidents. That amount will be increased in phases to $1 billion by 2020. Until the NLCA came into force, operators were only liable for up to $75 million in damages.

Nuclear power plant operators must cover at least 50% of their liability through insurance provided by insurers approved by the federal natural resources minister. In addition to the Nuclear Insurance Association of Canada, there are four approved insurers, Natural Resources Canada states on its website. They are: European Liability Insurance for the Nuclear Industry (Elini) based in Brussels; London-based Nuclear Risk Insurers Ltd.; Linx Underwriting Solutions Inc., a Markham, Ont.-based coverholder in the Lloyd’s market; and Northcourt Limited, a St. Julians, Malta-based Lloyds MGA.

NIAC is overseen by a committee of NIAC member companies, who form pools to insure nuclear risk. Pool members are property/casualty insurers, reinsurers and Lloyd’s underwriters licensed in Canada and approved by committee.