Ontario ice storm estimated to cost insurers up to $164 million

PCS’s preliminary estimate of a catastrophe event April 14-16 is $164 million, a PCS spokesperson wrote in an email to Canadian Underwriter. 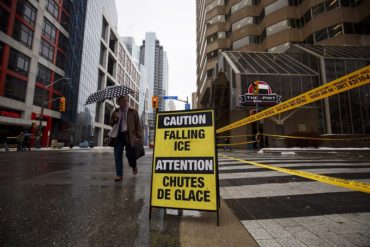 A man walks by the foot of John Street as an area around the CN Tower is closed off due to reports of falling ice in Toronto on Monday, April 16, 2018. THE CANADIAN PRESS/Cole Burston

On that weekend, Toronto had been under a flood watch for two days after freezing rain and ice pellets left roads and sidewalks slippery and treacherous. Police responded to more than 1,400 collisions in the GTA and surrounding areas during this period, as reported in the Toronto Star.

London, Ont.’s international airport got 14 hours of freezing rain mixed with ice pellets, for a total water equivalent of 55.1mm. Wiarton Airport, on the Bruce Peninsula northwest of Owen Sound,  got nearly 40 cm of snow 39.6 cm of snow April 14.

At the time, Gore Mutual and Aviva Canada told Canadian Underwriter that they considered the storm to be a cat event, defined by Catastrophe Indices and Quantification Inc. as an event that affects multiples insurers and causes property damage losses of greater than $25 million. Aviva reported April 16 that nearly 70% of claims arising from that storm were related to water damage.

Shortly before Christmas of 2013, Toronto was hit with an ice storm that left about 300,000 electrical power customers with no service.

In January, 1998 a widespread ice storm led to the second largest insured loss in Canadian history, when adjusted for inflation. As it stands, the most expensive natural disaster, measured by industry-wide insured losses, is the 2016 Fort McMurray, Alberta wildfire.