A central Ontario long-term care home devastated by an outbreak of a highly contagious variant of COVID-19 is facing a proposed class-action lawsuit from residents’ families who allege their loved ones were neglected by those charged with keeping them safe.

The unproven statement of claim filed to the Ontario Superior Court of Justice alleges Roberta Place, a long-term care home in Barrie, Ont., failed to take basic precautionary measures to protect against the novel coronavirus 10 months after the pandemic took hold in Canada.

“As a result of the defendants’ failures to adequately and properly plan, prepare and respond to the COVID-19 virus, the virus has run rampant through the Roberta Place Long Term Care Home,” the statement of claim reads.

“They failed to rectify a pattern of mismanagement, misallocation of resources and staffing, and repeated violations and cited deficiencies of infection control and prevention requirements.”

A COVID-19 outbreak was declared in the facility on Jan. 8, 2021, and since then, more than 200 people have contracted the virus, including all but one of the residents. More than 60 residents and an essential caregiver have died. 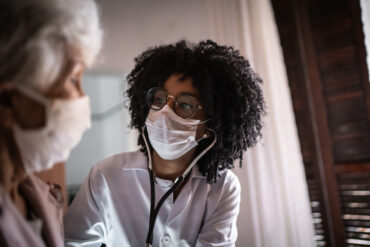 Officials with the Simcoe Muskoka District Health Unit have confirmed that at least some of the residents have a highly transmissible variant of the virus that was originally discovered in the U.K., and the region’s top doctor says he believes everyone infected at the long-term care home has that variant, but testing is still underway.

The statement of claim alleges the facility failed to keep residents with COVID-19 separate from those who didn’t have the virus.

The document also alleges the facility failed to cohort staff.

The home’s community relations co-ordinator, Stephanie Barber, said in an email they were aware of the lawsuit, but she did not address its allegations.

“We acknowledge that the outbreak remains extremely difficult and we have a tough road ahead, however, our commitment to our residents, family members, team members and our community remains steadfast,” Barber wrote.

Barber said Roberta Place implores the community to “exercise every precaution” against the U.K. variant due to its “aggressive transmission and rapid symptoms and/or deterioration.”

The statement of claim said Roberta Place did not enforce physical distancing or proper use of personal protective equipment, claiming the facility was “reckless, irresponsible, and neglectful of their responsibilities to provide high quality and compassionate care to the residents and staff of Roberta Place Long Term Care Home.”

It alleges the facility failed to keep family members up to date on the state of the outbreak.

“For those class members who survive the outbreak of COVID-19 at the Roberta Place Long Term Care Home, they have endured harsh and intolerable treatment. They were locked down in their rooms, fearing for their safety and lives, knowing other residents were dying around them and unable to visit with their loved ones and family members,” the document reads.

It’s one of a number of proposed class actions that have sprung up after COVID-19 ripped through long-term care homes across Canada.

A second Extendicare-run facility, Orchard Villa in Pickering, Ont., has had at least 70 deaths, according to the latest provincial data.

The situation has prompted the provincial government to create the Long-Term Care COVID-19 Commission, which is examining what, exactly, went wrong in the system and how it can be prevented going forward.

The commission, which is still hearing testimony, has so far released two sets of interim recommendations.

Feature image: A woman has her temperature taken as she arrives at the Roberta Place Long Term Care home in Barrie, Ont. on Monday, January 18, 2021. The home has seen an outbreak of COVID-19 among staff and residents. THE CANADIAN PRESS/Frank Gunn