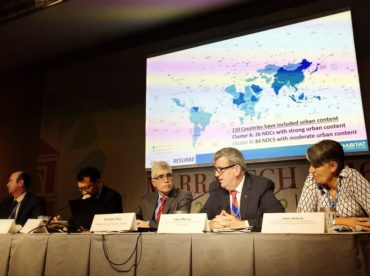 Talks focused on how to support businesses and fuel economic growth within a linked carbon market system. Glen Murray, Ontario’s Minister of the Environment and Climate Change, is second from right. Photo: @ONenvironnement.

Ontario’s Minister of the Environment and Climate Change Glen Murray was joined by Quebec Premier Philippe Couillard and California’s Secretary for Environmental Protection, Matt Rodriquez, for a discussion at the 22nd Conference of the Parties to the United Nations Framework Convention on Climate Change (COP22) in Marrakech, Morocco.

Talks focused on how to support businesses and fuel economic growth within a linked carbon market system, Ontario’s Ministry of the Environment and Climate Change noted in a statement. Linking with other cap-and-trade programs helps companies comply at the lowest possible cost, as well as helping jurisdictions meet their targets for reduced GHG emissions. Linked markets bring many economic benefits, the release said, including:

Ontario will continue to work with Quebec and California with the intent to link its cap-and-trade program in 2018, the environment ministry reported.

“As the world’s nations strive to confront climate change, our partnership sets an example that the successful linking of markets can reduce overall costs while driving innovation in clean energy and increasing the ambition of our efforts to curb greenhouse gas emissions,” Rodriquez said in the statement.

In May, Ontario passed climate change legislation that ensures the province is “accountable for responsibly and transparently investing proceeds from the cap-and-trade program into actions that reduce greenhouse gas pollution, create jobs and help people and businesses shift to a low-carbon economy,” the ministry said. The provincial Climate Change Action Plan is investing up to $8.3 billion over the next five years in projects that support these actions.

The ministry also reported that after introducing its cap-and-trade program and putting a price on carbon, California’s economy “grew at a pace that exceeded the growth of the rest of the U.S. economy.” The number of jobs in California grew by almost 3.3% in the first year-and-a-half of the program, outstripping the national rate of job creation, which was 2.5% over the same period.