The Ontario government is required to appoint a committee to review recommendations, on preventing head injury in sports, now that the Rowan’s Law Advisory Committee Act has been passed into law. 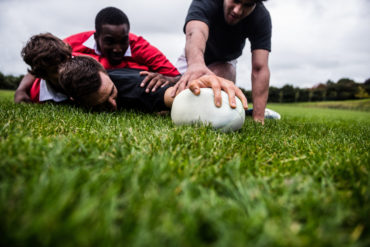 Rowan Stringer, 17, died May 12, 2013 in an Ottawa hospital of malignant cerebral edema due to second impact syndrome. She had suffered traumatic brain injury after playing rugby.

“In the course of a three-week period, Rowan suffered multiple concussions,” Lisa Macleod, MPP for Nepean-Carleton, said June 7 in the legislature when the Rowan’s Law Advisory Committee Act, Bill 149, was tabled for third reading.

As a result, a committee of 15 members – appointed by the Ontario minister of tourism, culture and sport – will be charged with making “recommendations on how to implement” the 49 jury recommendations released in 2015 as a result of a coroner’s inquest held by Dr. Louise McNaughton-Filion, regional supervising coroner for eastern Ontario.

The coroner’s jury recommended that Ontario Boards of Education, the Ontario School Boards’ Insurance Exchange (OSBIE), and the Ontario Physical and Health Education Association (OPHEA) “ensure that the head coach of a high school rugby team attain a minimum of level 1 coach qualification, as per World Rugby standards.” The jury stated that all rugby coaches, should, at a minimum, meet OPHEA requirements for rugby coaching in the Ontario Physical Education Safety Guidelines.

Of its 48 other recommendations, the coroner’s jury made eight to Rugby Canada, Rugby Ontario, the Eastern Ontario Rugby Union, the Ontario Boards of Education, OSBIE and OPHEA.

One of those is to establish “a standard for rugby field quality to ensure that the surface is safe for youth athlete play.”

Another is to “implement mandatory pre-season safety sessions for sport teams for athletes and their parents,” and sessions “for higher risk sports should cover the symptoms and signs of concussion, reporting of the suspicion of concussion, exclusion of those suspected of concussion and proper concussion management.” There should also be “zero tolerance of head hits and high tackles at any level of play in rugby,” with “progressive penalties” including expulsion for repeat offenders, the coroner’s jury recommended.

Bill 149 was subject of hearings before the Standing Committee on Justice Policy.

“Concussions are a significant public health issue in our country and in our province” neurosurgeon Dr. Charles Tator told the legislative committee June 2. “It’s the jiggle of the brain within the skull that causes concussion. That’s precisely why helmets don’t protect against concussion, because the brain still jiggles, and no one has created a helmet that prevents that jiggle. So we have to be smarter than just putting helmets on kids.”

Dr. Tator is a neurosurgery professor at the University of Toronto and project director of the Canadian Sports Concussion Project at the Krembil Neuroscience Centre, a facility at Toronto Western Hospital that treats patients with injuries to the brain, spinal cord and eyes.

“Concussions in sports are especially a problem – in collision sports most dramatically, like hockey, football and rugby – because here is the issue of repetitive concussion,” Dr. Tator told the justice policy committee June 2 at Queen’s Park in Toronto. “What we’ve learned is that it’s the repetitive concussion that can cause difficulties, including late brain degeneration.”

Dr. Tator added that about 10% of people who suffer concussions continue to have problems afterwards.

“Rowan is in that 10%,” Dr. Tator said. “It is now quite definite from research that women are more susceptible to concussion than men. We don’t know why. We suspect that there is a significant genetic effect. We do recognize the role of pre-existing conditions, like if you have migraines or depression before concussion, you’re certainly going to have them after.”

MPPs who spoke in favour of Bill 149 included France Gelinas, NDP MPP for Nickel Belt. Gelinas told the legislature Dec. 10, 2015 that she is a physiotherapist who worked in the past with children with traumatic brain injury.

“We would see those kids in physio, and you could see the damage that had been done to their brain function, whether it was what we called a higher-order neurocognitive deficit where knowledge that they used to have, they were not able to recollect anymore, or, in physio, we would see lots of lower-level structure concussions, which are when the brainstem, the spinal cord, the cerebellum-there’s a thing called proprioception,” Gelinas told the legislature during debate on second reading of Bill 149.