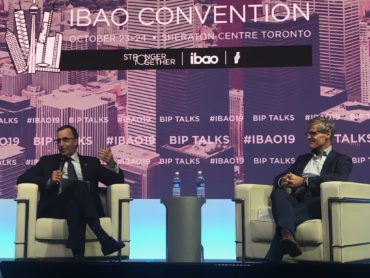 IBC president and CEO Don Forgeron, left, and FSRA vice president of auto/insurance Tim Bzowey discuss the future of insurance regulations in Ontario at the IBAO Convention on Oct. 23 in Toronto.

Citing a needed “culture change” as just one of the reasons, the body that regulates insurance in Ontario is moving towards being a principles-based group instead of one that is focused on a set of rules.

And for those who worry about a lack of teeth, don’t worry, they’ll be ready to bite when necessary, said Tim Bzowey, Financial Services Regulatory Authority of Ontario (FSRA) executive vice president of auto/insurance.

During a BIP Talk at the 2019 Insurance Brokers Association of Ontario Convention last Wednesday in Toronto, Bzowey and Insurance Bureau of Canada (IBC) president and CEO Don Forgeron discussed the future of insurance regulation in the province. Bzowey took the opportunity to explain the regulator’s approach to principles over rules and how it will be beneficial to the industry.

“We’re very much interested in the results of the work and not the work itself,” Bzowey said. “That’s been a little bit of the culture change, frankly, that we need to work on at the regulator.

“There have been a lot of processes that are about checking a box and completing a process, and they may or may not contribute to a positive regulatory outcome. They may create so much burden for those being regulated that they’re not worth the effort in the first place.”

Instead, regulation should be easing the burden placed on companies, Bzowey said. That’s where the principles-based model comes into play. “That’ll be a foundation of how we regulate. That’s quite different from the very-prescriptive, rules-based regime to which people have become accustomed.”

He gave the example of a highway with a speed limit of 90 km/h. You can’t drive faster than that, since that’s “a prescriptive rule.” Meanwhile, something more principles-based would advise drivers to drive in a manner that is safe for road conditions and taking into account the experience of the driver and quality of the vehicle.

“If you take that and apply that to your own business, what it does is give all parts of the industry more latitude to better serve customers and [create] more of an obligation on the regulated to embed controls within their operations to better regulate themselves, frankly,” Bzowey said.

With less regulation comes more opportunity for innovation and competition, which can give the industry a needed shot in the arm, he noted. “What we’re going to do through principles-based regulation is that we’re not going to create a level playing field, because I’m actually not interested in a level playing field. We’re going to slant the field in favour of firms and organizations that are really, truly interested in serving customers.”

Some P&C industry lawyers have observed that principles-based regulation can be somewhat abstract and, hence, difficult to enforce.

But FSRA has every intention of going after unscrupulous players in the marketplace. “We will,” FSRA’s Bzowey promised at the 2019 IBAO Convention. Bzowey said industry CEOs have told him that such enforcement action has been missing in the past. “They’re saying, ‘Look, I’m trying to play by the rules and you’ve got this going on over here. It’s not fair.’ And they’d be right.”

It’s a trade-off between the two sides. The industry gets less regulation, but those that go beyond the scope will face “consequences on the back end,” Bzowey said. “My hope, and my expectation, is that we won’t have to exercise [consequences] very often. But I’m also absolutely certain that we’re going to have to exercise them.”