MANAGUA, Nicaragua – Tropical Storm Otto killed at least four people in Costa Rica and then headed into the Pacific Ocean Friday after making landfall as the southernmost hurricane on record to hit Central America. 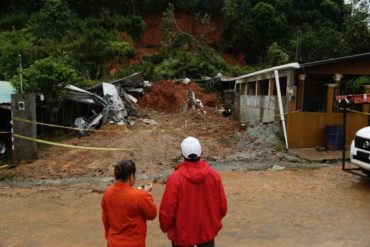 Civil Defense workers look the area where a couple was killed after their home was destroyed by a mudslide in Arraijan on the outskirts of Panama City, Tuesday, Nov. 22, 2016. Civil defense officials in Panama say the country has already seen three deaths blamed on late-season Tropical Storm Otto. (AP Photo/Arnulfo Franco)

Costa Rican President Luis Guillermo Solis announced that three had been killed in the town of Guayabo de Bagaces, a town south of the Costa Rica-Nicaragua border. He said a fourth person in an unspecified location, and that at least six people were missing in the nearby town of Bijagua.

Solis said as much water fell on the area in a few hours as normally falls in a month, and said some people had been trapped by rising waters.

Otto made landfall on Nicaragua’s Caribbean coast on Thursday as a dangerous Category 2 storm but it faded to tropical storm force before emerging over the eastern Pacific early Friday.

Authorities in Nicaragua said the hurricane had damaged houses, but so far there were no reports of casualties. Earlier, heavy rains from the storm were blamed for three deaths in Panama.

“There is a lot of rain, the sea is rough and the wind is strong. We have been in danger all night, getting cold and wet,” said Alicia Lampson, 21, as she arrived at a shelter with a group of people from the village of Monkey Point, south of Bluefields, Nicaragua.

The U.S. National Hurricane Center said that by Friday morning, the storm was centred about 245 miles (395 kilometres) south-southeast of El Salvador’s capital, San Salvador, and had maximum sustained winds of 65 mph (100 kph). It was moving toward the west at 16 mph (26 kph). It was projected to keep moving westward away from Central America, further into Pacific.

#Otto has intensified to 100 mph, the strongest Atlantic hurricane this late in the season since 1934. pic.twitter.com/eYk0RNXOrh

The Nicaraguan government earlier declared a state of emergency, and said evacuations would continue because of the continued risk of flooding. Schools were closed.

Officials in Costa Rica evacuated 2,500 people before the hurricane hit and called off school nationwide for the rest of the week.

A small(ish) tree that nearly took out my vehicle #HurricaneOtto, southern #Nicaragua pic.twitter.com/hfXYg21nRO

Latest satellite image showing the eye of Hurricane Otto as the Category 2 storm approaches the east coast of Nicaragua and Costa Rica. pic.twitter.com/cTT76URp40