The overall direct economic impact of the Fort McMurray wildfire is expected to approach US$5 billion once all attributable losses are realized, according to Impact Forecasting, Aon Benfield’s catastrophe model development centre of excellence. 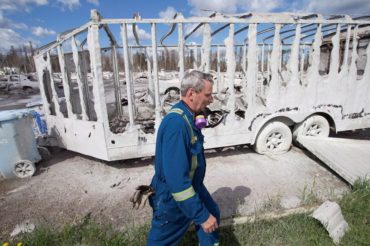 Resident Dale Pillar walks through the Thickwood neighbourhood of Fort McMurray Alta, on Friday, June 3, 2016. Members of the community are now being allowed back into their homes. THE CANADIAN PRESS/Jason Franson

“The first half of 2016 ended up as the costliest on an economic and insured loss basis since 2011,” said Steve Bowen, director within Aon Benfield’s Impact Forecasting team, in a press release. “The year has already been highlighted by a significant earthquake sequence in Japan, the Fort McMurray wildfire in Canada, flooding in Western Europe and a series of extensive hailstorms in the United States.”

On Wednesday, Impact Forecasting released its Global Catastrophe Recap: First Half of 2016 report evaluating the natural disaster events that occurred worldwide in the first six months of the year. According to the report, preliminary global economic losses reached US$98 billion in the first half of 2016, with global insured losses of US$30 billion.

The percentage of global economic losses covered by public and private insurers was 30%, slightly above the 10-year average of 28% due to the prevalence of losses in the United States where insurance penetration is higher. In fact, the U.S. accounted for 47% of global insurance losses sustained by public and private insurance entities in the period under review, Impact Forecasting said in the press release. The U.S. sustained US$14 billion in insured losses, with Asia-Pacific second at nearly US$7 billion. The Americas (US$5 billion) and Europe, the Middle East and Africa (US$4 billion) were close behind.

From an economic loss perspective, earthquake was the costliest disaster type during the period (US$34 billion), comprising 30% of the loss total, mainly attributable to two powerful earthquakes that struck Japan’s Kumamoto region on April 14 and April 16.

From an insurance perspective, severe convective storm (SCS) was the costliest peril (US$12.3 billion), comprising 42% of the loss total. Most of the insurable losses from SCS resulted from major thunderstorm events in the U.S. that prompted widespread hail, damaging straight-line winds and tornadoes. The U.S. state of Texas alone recorded roughly 55% of all insured SCS losses, the press release noted.

Meanwhile, the report highlights that there were at least six individual billion-dollar global insured events (five of which were weather-related) during the first half of the year, including the Fort McMurray wildfire (see graph above). According to the report, major insured losses included the late May and early June flooding and severe weather in Europe (US$3.4 billion), the Fort McMurray wildfire (US$3.2 billion) and the April 10-15 SCS outbreak in the central U.S. (US$3.2 billion). “All of the estimates are subject to revision as losses are further developed,” the report indicated.

There were also at least 22 separate billion-dollar economic loss events – including at least 20 that were weather-related, led by the U.S. (nine events), Asia-Pacific (seven events), the Americas (three events), and Europe, the Middle East and Africa (three events).

Bowen predicted that with the pending transition to La Niña during the second half of the year, there will be a heightened focus on the risk of flooding across parts of Asia and hurricane landfall in the Atlantic Ocean basin. “The financial toll of weather disasters during La Niña years has historically been among the costliest on record, and so we will wait to see whether this trend plays out in the coming months,” he said.