Are Canadian dentists covered for business interruption or commercial liability arising from the COVID-19 pandemic?

That is open to question right now for some existing policies. What seems clear is that if a dentist wants to buy a new policy through CDSPI, it will exclude pandemic.

CDSPI’s property and casualty products include TripleGuard, which is written by Aviva. With TripleGuard, property coverages include equipment, contents and leasehold improvements, as well as replacement of lost income from interruption due to practice damage. TripleGuard also includes commercial liability.

“At this time, we are actively working on behalf of dentists with the insurer, Aviva Insurance Company of Canada, to obtain clarity on the conditions of TripleGuard coverage in a pandemic situation,” a CDSPI spokesperson told Canadian Underwriter Monday. “The circumstances in each province are unique. Individual announcements by your provincial regulatory bodies are unprecedented, increasing the complexity in finding a uniform solution. We will share information with policyholders as soon as it becomes available.” 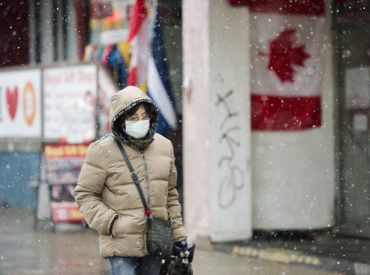 A pedestrian wears a protective mask as she walks in the winter weather downtown in Toronto on Wednesday, February 26, 2020. The novel coronavirus, known as COVID-19 is expected to turn into a global pandemic. THE CANADIAN PRESS/Nathan Denette

Canadian Underwriter contacted Aviva for this story, but did not get a response before press time.

TripleGuard has a variety of coverages, as explained in the brochure on the CDSPI website. For example, the office contents coverage is for items that are stolen or damaged by fire or vandalism (among other causes of damage). The property covered would include dental equipment, leasehold improvements, drugs, supplies, furniture, fixtures, signage and office equipment, among others.

The practice interruption coverage has a 300-word description in the CDSPI brochure, which is silent on pandemic and disease. Coverage is triggered by an insured peril such as fire, theft or vandalism.

It could also be triggered by lack of access – if, for example, the client is prohibited for up to four weeks from entering the premises by police, fire department, or other government authority. The prohibition would have to be based on a direct result of damage to neighbouring premises caused by an insured peril.

Two other types of incidents would trigger coverage under TripleGuard:

2 Comments » for Pandemic coverage: The big unknown for dentists