An international agreement to limit carbon emissions, regulations requiring some natural resources firms to have cash on hand to decommission facilities and the threat of cyber attack are among the risks cited by senior executives in a Willis Towers Watson survey released Tuesday.

Willis Towers Watson announced the release of a report titled Natural Resources Risk Index 2016 The View from the Boardroom.

That report is based on a survey of executives from 350 companies in oil, gas and chemicals, metals and mining, and power and utilities. Among the respondents were 70 chief executive officers, 60 chief financial officers and 60 chief risk officers. 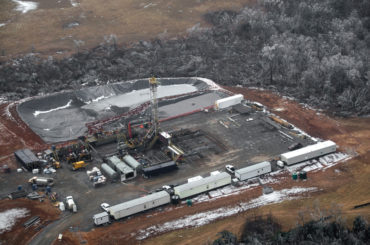 Using phone interviews, the survey “gauged respondents’ perceptions of risk in relation to five megatrends that were established,” based on research.

Respondents were “then asked to rank megatrends and risks for their industry covering three timeframes: the present, 12 months ahead and 10 years in the future.”

One of those megatrends was geopolitical instability and regulatory change.

“In the next decade, it is likely government regulation of the industry will increase,” stated Nick Dussuyer, head of natural resources at Willis Towers Watson, in a release. “If companies want a role in shaping the regulatory agenda and to have a voice, they need to engage proactively with government and other key stakeholders and put forward their point of view.” 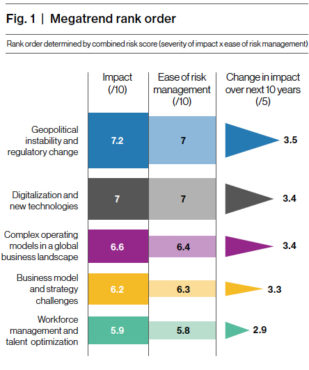 “Together with our international partners, we agreed to strengthen the global response to limit global average temperature rise to well below 2 degrees Celsius as well as pursue efforts to limit the increase to 1.5 degrees,” Prime Minister Justin Trudeau stated in a press release last December after the conference.

“Signatories to the deal have agreed to present plans to limit carbon emissions,” Willis Towers Watson stated in its Natural Resources Risk Index. “They are likely to place much of the burden of actual implementation on the companies that produce, process and sell natural resources such as oil, gas, metals and minerals.”

This, Willis Towers Watson added, “presents particular risks for companies that produce unconventional fuel such as shale oil and gas, and fracked fuels.”

In Canada, most current drilling and production of shale and tight gas is in northeast British Columbia, though there are also resources in Alberta, Saskatchewan, Manitoba, Ontario, Quebec, New Brunswick, Nova Scotia, the Northwest Territories and Yukon, Natural Resources Canada states on its website.

But in its report, Willis Towers Watson said in Canada, “the new government of Justin Trudeau looks likely to take a quite different view of shale fuel producers than the administration of his predecessor, Stephen Harper.”

Vulnerability to reclamation obligations was ranked sixth in the top risks affecting the industry by respondents to Willis Towers Watson’s survey.

“Power and utility companies see reclamation obligations as the greatest risk they face in coming years, particularly producers who operate nuclear and coal plants that are approaching the end of their natural productive life,” Willis Towers Watson said in the report, adding that many governments “are demanding that resources producers and users have cash on hand to decommission facilities before they will give the regulatory go ahead for new projects, placing a strain on companies’ cash flow.”

The top five risks, in order, were: operating in more technically challenging physical environments; currency and interest rate fluctuations; increased cyber-security and data privacy risks; natural disasters and epidemics; and technology that opens up the marketplace to disruptors.

“Automation, live data analytics and live-streaming feeds of operations have helped an industry that’s under enormous pressure to find production efficiencies and streamline and accelerate work in the face of increasingly large, complex projects and shortages of skilled staff,” according to the report. But survey respondents were “worried about the rising threat of cyber-attack, and with good reason – the number of digital assaults on oil, gas, and chemicals, and power and utilities companies in particular is on the rise.”

In addition to geopolitical instability and regulatory change, the other megatrends identified in the report were: digitalization and new technologies; workforce management and talent optimization; business model and strategy challenges; and complex operating models in a global business landscape.

“As the industry operates in a global marketplace, its executives find themselves exploring and extracting in new areas that would have been out of the question 20 or even 10 years ago,” Willis Towers Watson said in the report. “For oil, gas and chemicals producers, this means searching for new hydrocarbon wealth at incredible depths below sea level and in extreme environments like the Arctic.”

“For mining companies the key issue is one of location: many countries that promise the best returns lack sociopolitical stability and in many cases, the infrastructure required for major mining initiatives.”