Thirty-one countries formally joined the Paris climate change pact Wednesday, bringing the total number of countries ratifying the treaty to 60 and raising hopes that it will enter into effect by the end of the year. 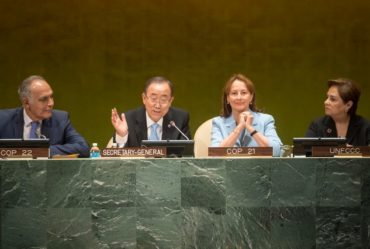 Secretary-General Ban Ki-moon (centre left) during the High-level Event on the Entry into Force of the Paris Agreement. UN Photo/Cia Pak.

The number is higher than the 55-country threshold needed for the treaty to enter into force. But because together those countries account for 48 per cent of total global emissions – short of the 55 per cent threshold – the agreement must wait for more nations to join.

“Today we also heard commitments from many other countries to join the agreement this year. Their combined emissions will take us well past the required amount for the agreement to enter into force,” Secretary-General Ban Ki-moon said at an event on the sidelines of the high-level U.N. General Assembly gathering. “I am convinced that the Paris Agreement will enter into force before the end of 2016.”

U.S. Secretary of State John Kerry said he is confident of reaching the magic number before the next U.N. climate conference, which starts Nov. 7 in Marrakech, Morocco. He urged people everywhere “to become warriors for the planet.”

The world’s two biggest emitters, the United States and China, have already ratified the deal, providing momentum for other countries to quickly ratify the accord.

Brazil, Mexico and Argentina were the largest emitters to join the treaty Wednesday, but many of the countries that joined were small island nations, whose very existence is threatened by rising sea levels provoked by global warming, but whose individual emissions account for a mere fraction of a per cent of total global emissions.

The treaty’s ratification has taken place at what is considered a blistering pace for international diplomacy, reflecting a sense of urgency in the fight against global warming and a desire to seal the deal before Ban and U.S. President Barack Obama leave office.

Related: UN releases a draft for potential agreement on climate to be reached in December in Paris

The European Union, which accounts for 12 per cent of global emissions, is lagging behind other countries in joining the deal but is trying to speed things up.

He said EU environment ministers will meet Friday to discuss a plan to ratify the agreement as a bloc, even though only a handful of the 28 member states have approved it domestically.

If all agree and the plan is endorsed by the European Parliament, which is likely, the EU could ratify the deal by early October.

“We’re seeing broad political support around the world for this agreement, other countries said they’re going to join in the coming several months so we really see the momentum from Paris not only continuing but actually growing,” Waskow said.

After years of negotiations, governments agreed in Paris last December to curb the emissions of carbon dioxide and other greenhouse gases that scientists say are warming the planet.

So far, 185 nations have signed the agreement which takes effect 30 days after 55 countries, representing 55 per cent of global emissions, deposit their ratifications with the secretary-general.