There’s a fairly significant gap between what government agencies have to say about distracted driving and what data companies are able to capture, and that is playing a role in the ineffective portrayal and messaging around the seriousness of people using their phones while operating vehicles, according to a recent webinar panel.

In 2019, about one-third of all trips showed “significant phone distraction,” according to Cambridge Mobile Telematics’ (CMT) own data gathered through its apps. In 2020, which included nine months of a global pandemic, the number of trips where the driver was distracted by their phone went up to 40%.

“That number is much higher than we see in the statistics published by the road safety community,” reported Ryan McMahon, VP of insurance and government affairs at CMT.

The U.S.-based National Highway Traffic Safety Administration reported in late 2019 that the percentage of passenger vehicle drivers talking on handheld phones increased from 2.9% in 2017 to 3.2% in 2018. Those visibly using headsets while driving dropped from 0.45% to 0.35% while visible manipulation of handheld devices went up from 2% to 2.1% in the same time period. 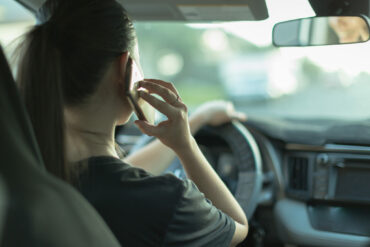 According to the National Safety Council, about a quarter (26%) of all car crashes involved phone use, even hands-free devices. CAA reported in 2020 that its polling found that 47% of Canadians admitted to typing or using a voice-to-text feature to send a message while driving — 33% said they did it at a stoplight. InsuranceHotline.com reported that 26% of drivers have checked messages while operating a car in motion while another 41% of Canadians said they are at least somewhat likely to check messages when stopped at a traffic light.

All of this is to say that government and advocacy agency data and telematics company data are far apart. If insurers want to see risk decrease, gathering better data and improving messaging around the perils of distracted driving is a must.

The data that government agencies get is either based on observational data or crash data, explained Emily Stein, president of the Safe Roads Alliance, during the Road Safety in the Digital Age: The Impact of Phone-Based Distraction webinar held this month. Furthermore, she added, it’s hard to pinpoint exactly what a driver may have been doing before a crash. Some may have been talking or texting, but others could be using Facebook, for example.

“What else were they doing on their phone? We have a huge lack of data to show how prevalent distracted driving is either [in] real-time driving or right before a crash,” Stein said.

The back-up (or safety) driver of the fatal Uber autonomous vehicle crash in Arizona in 2018 was streaming a television show and distracted at the time when the vehicle struck a pedestrian, according to the local police department.

“Anecdotally, [people] see drivers on the phone around them when they’re driving and they feel scared,” Stein said. “But we need the numbers to show how serious a problem it is.”

Part of the issue is that distracted driving isn’t on the same level as drunk driving in terms of what people deem a danger to society, explained Joel Feldman, president of End Distracted Driving (EndDD.org), a group he started after his daughter was killed by a distracted driver in 2009. 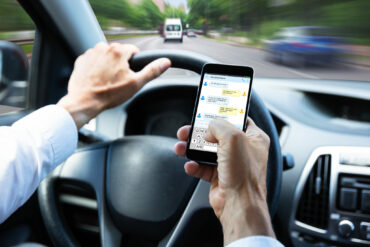 “We’re not there yet with distracted driving but I’m optimistic that we can get there,” Feldman said.

He’s a personal injury lawyer who has had to go to court and argue someone was negligent because of their distracted driving. But at the same time, he was driving distracted because he thought he could handle it. When he made that connection, or realized the lack of it, it made him realize one thing.

“I’m not a big believer in the fact that a large portion of our population is going to be swayed by people telling them that driving while distracted is dangerous because I didn’t think it was dangerous for me,” he said.

But if Feldman saw someone else driving distracted, he would be up in arms about it. “I was a terrible hypocrite and I’m sure there are a lot of folks who are listening who might share those feelings of hypocrisy if they want to be honest.”