The property and casualty industry in the United States marked a third consecutive year of underwriting profitability, with US$6.2 billion in underwriting income in 2015, according to an A.M. Best Company special report released on Friday. 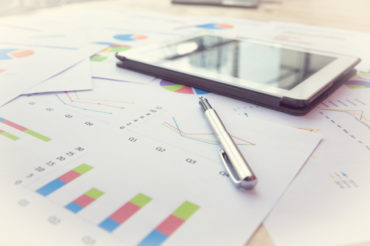 However, the lower level of underwriting income and an 11.2% decline in net investment income drove pre-tax operating and net income down from their 2014 levels, A.M. Best said in a press release. The Best Special Report, titled U.S. P/C Industry Marks Third Consecutive Underwriting Gain, But Surplus Declines on Investment Results, states that the combination of lower net income and a negative change in the industry’s accumulated unrealized gain position resulted in a US$1.5 billion reduction in policyholders’ surplus, to US$688.6 billion at year-end 2015, a decline of 0.2%.

Net premiums written (NPW) continued growing in 2015, up 3.4% to US$519 billion from the prior year. But this represented a second year of declining premium growth since the peak of 4.7% NPW growth in 2013. Modest economic growth, along with rate and exposure increases continue to drive premium up, even as market pressure builds, particularly in commercial lines, the rating agency said.

Catastrophe activity in the U.S. remained relatively benign in 2015, with cat losses adding just 3.5 points to the industry combined ratio, down from 4 points in 2014. Despite this reduction in catastrophe losses, the P&C industry’s accident year combined ratio increased by 0.5 points, and the benefit from favourable development of prior accident year loss reserves declined. The combination of these factors deteriorated the reported 2015 combined ratio to 98.3% from 97.4% in the prior year. 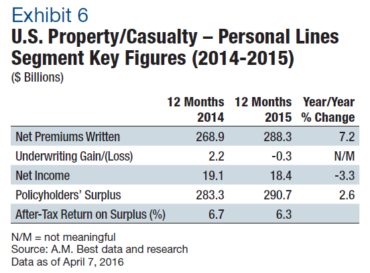 The report noted that the personal lines segment saw a substantial adverse impact on surplus growth from a negative change in its unrealized gain position, in line with the overall industry results. Underwriting income in 2015 declined to a loss of US$0.3 billion from an underwriting profit of US$2.2 billion in the previous year. Reinsurance transactions that took place in 2014 caused an unusually high level of favourable development of loss reserves in that year; a return to a more normal, lower level of favourable reserve actions in 2015 reduced the benefit and contributed to the loss. 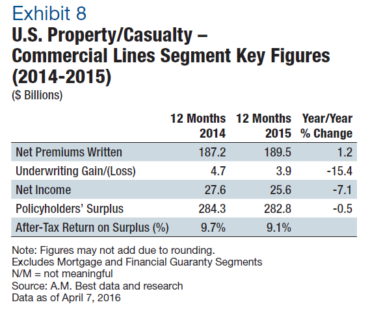