P&C leaders want you to take your breaks, big and small

Take your vacations. Block out time to take breaks during the day. Get away from the computer. That’s some of the advice from human resources leaders in the property and casualty insurance industry during a recent webinar panel discussion.

Just because you’re working from home doesn’t mean you have to work harder or longer, said Jan LeRoy, vice president of human resources at Marsh Canada. Speaking at the recent virtual CIP Symposium session The Decentralized Workforce, she reported that a number of people have come to her wondering what the point was of taking a vacation break in the last year. There’s nowhere to go because of lockdowns and border and travel restrictions, they would say, all thanks to the COVID-19 pandemic that has forced most of the P&C industry to work from home for more than a year now.

“And this is critical — that you have to take that physical break,” she said. “And, yes, it may not be as exciting as it used to be in terms of where you can go, but you need to take that mental break. You need to remove yourself from the computer — and maybe even from your personal phone for that matter — and shut off technology, shut off the news and set some boundaries.”

Treat the situation as if you were working out a muscle, she recommended. You can’t just set boundaries and forget it. People need to practice it and reinforce it. It’s not easy, she admitted. 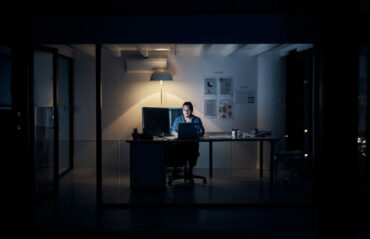 It’s become simple for people to work too much if they’re at home instead of the office, Boyle said. “It’s so easy to just log into your computer [and] continue to work because we don’t have that separation, where we had commuting time or we had to get the kids to activities or we had to help out in some other way. We’re not physically doing some of those things.”

Some companies are taking matters into their own hands to ensure staff are getting the breaks they need, Boyle said. “I know some organizations have actually blocked time in people’s calendars so that meetings can’t happen; that you’re actually shutting down at a certain time in the evening. Using technology to force some of that behaviour [is important].”

Another use of technology would be to schedule meetings to be 45 minutes instead of an hour so that there can be a break in case someone has back-to-back meetings.

Having flexibility is good for everyone, but it can also lead to bad habits, Fitzgerald said. For example, someone who prefers to start their workday later or break up their day and finish at 11 p.m. may give off the impression that they’re working all hours of the day, and so everyone else feels pressure to work late as well.

That happened at Fitzgerald’s company where a senior leader started his workday at 4 p.m. because of homeschooling and other personal obligations that required his attention during typical working hours.

But his late-night emails were getting replied to right away as opposed to the next day like he figured would happen.

“He’s like, ‘That’s got to stop,” Fitzgerald said. And so he puts a header at the top of every email that says something along the lines of “I work odd hours that suit my lifestyle. If I’m messaging outside typical office hours, I do not expect a reply.”

For those in a similar position, it can be as simple as notifying people that you don’t expect them to respond until they’re in the normal workday, she added. Or set messages to be automatically sent the following morning.

“You can still use the technology to support you and I think that can be really powerful,” Fitzgerald said.

More News
Related
Focus has been on staff health, but what about the leaders?

1 Comment » for P&C leaders want you to take your breaks, big and small