Piracy down in 2016 Q3, but crew kidnapping persists in some areas: report

As reported in its Q3 2016 Piracy Assessment Thursday, the specialist crisis prevention and response consultancy states that “West Africa notably experienced a drop in severe incidents such as attacks and hijackings.”

Overall, NYA International states there were a total of 96 incidents recorded globally in the third quarter of 2016, with the majority being criminal boardings (59%), followed  by  hijackings (18%) and attacks (10%).

That positive, though, is countered by the negative that a high threat of crew kidnapping and hijacking remains in certain global hotspots.

In West Africa, there was a total of 35 piracy incidents. More specifically, three attacks and five hijackings occurred in Q3 and 18 criminal boardings were reported.

Still, the amnesty program’s “effectiveness remains to be determined while smaller militant groups and offshoots continue to emerge and demonstrate attack capabilities.”

The report “highlights the continuous threat to crew and operations off West Africa and Southeast Asia,” Alex Kemp, managing director of NYA International, says in the company statement.

“Although total incidents were generally lower, the relative impunity with which some pirate groups operate in these regions demonstrates the scale of the challenge facing regional maritime authorities,” Kemp goes on to say.

Perhaps more positively, the report also describes a number of high-profile court proceedings against suspected pirates in 2016 Q3. “The proceedings are indicative of a more holistic approach to prosecuting suspected pirates, which commonly threatens to undermine the region’s counter-piracy efforts,” the statement notes.

Of the seven reported hijackings, NYA International reports that three were confirmed to have been carried out by the Islamist militant Abu Sayyaf Group (ASG) and to have involved crew kidnapping.

All seven hijackings reported in 2016 Q3 targeted slow-moving vessels with low freeboards, such as fishing trawlers, tugs and passenger boats, and all except one involved the kidnapping of crew members. 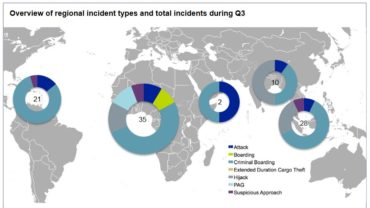 The report further highlights the continuing threat to maritime and oil industry staff and operations from resurgent militancy in the Delta region. Though in August, the militant group the Niger Delta Avengers (NDA) agreed to cease hostilities, it nonetheless attacked Shell assets in July and September, and threatened to target ExxonMobil employees.

“Driven by extreme economic inequality across the region, sporadic low-level criminal boardings at ports and anchorages will remain the most common incident type in Southeast Asia,” the report adds.

Just two incidents were reported in East Africa and the Indian Ocean HRA, where Somalia-based pirate groups frequently operated over the past decade.

“Despite a 75% decline in Q3 2016 piracy incidents compared to the previous quarter, there has been no discernible change in pirate modus operandi,” notes the region’s threat assessment.

Still, the report cautions “illegal, unreported and unregulated fishing (IUU) by large international trawlers could be a catalyst for reigniting piracy” in East Africa.

“IUU has historically been considered as a contributing factor to piracy in East Africa and any complacency threatens to undermine advances made in the region to date,” it points out.

“While it is reassuring to see historically low piracy levels off Somalia and in the HRA following years of effective international counter-piracy and land-based operations,” Kemp notes in the statement, “the persistence of the threat in West Africa and Southeast Asia should be noted by ship owners, managers and charterers.”

Related: Sea piracy drops to 21-year low in first half of 2016: global report