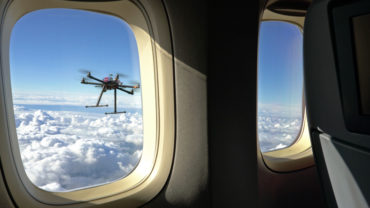 Transport Minister Marc Garneau said he was “extremely preoccupied” to hear that a small Skyjet plane was struck by a drone as it approached the Jean Lesage airport on Thursday.

“This should not have happened, that drone should not have been there, and it’s important to point out that aircraft are particularly vulnerable when they’re on final approach,” he told reporters in Montreal.

Garneau added it was the first recorded incident of a drone hitting a commercial plane in Canada.

“It is important to remind all people that use drones for recreational purposes that there are rules in place,” he said.

An airport spokesman said the plane was arriving from Rouyn-Noranda with eight people aboard when it was struck about three kilometres from the airport.

Mathieu Claise said the plane landed safely, but he couldn’t comment on the condition of the aircraft or the passengers.

Greg McConnell, the national chairperson of the Canadian Federal Pilots’ Association, said the incident “was just a matter of time.”

He said that if a bird hitting an airplane engine can cause an emergency landing or “catastrophic event,” a drone could do the same.

Transport Canada has issued a series of interim safety measures for drone operators as it continues to work to regulate the industry.

Garneau said Sunday that the rules to be introduced in 2018 would include testing for pilots, mandatory identification of drones and an age limit.

McConnell says he’s glad the federal government is taking steps to regulate drones, though he wonders why it seems to be taking so long.

While the damage from Thursday’s collision appears to have been minor, Garneau said his department was taking the incident seriously.

He said they were following the situation in partnership with airport officials, Quebec City police, NAV CANADA and the Transportation Safety Board of Canada.

The news release stated that anyone who is found to have endangered the safety of an aircraft could face a $25,000 fine or prison time.

It said 1,596 drone incidents have been reported to Transport Canada in 2017, and 131 of them were deemed aviation safety concerns.

— By Morgan Lowrie and Vicky Fragasso-Marquis in Montreal