OTTAWA – Prime Minister Justin Trudeau declared victory Friday in his campaign to craft a national “framework” agreement on climate change – even though Saskatchewan and Manitoba refused to sign on to the deal and British Columbia claimed a major carve-out. 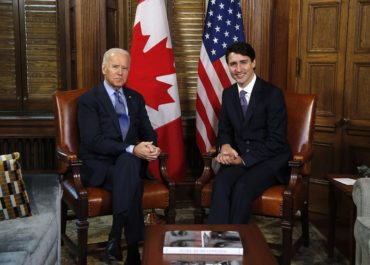 Prime Minister Justin Trudeau meets with US Vice-President Joe Biden on Parliament Hill in Ottawa on Friday, December 9, 2016. The vice-president is scheduled to sit down later today with Canada’s premiers and territorial and aboriginal leaders, who are gathered in Ottawa for a day-long first ministers meeting to talk about climate change and health care. THE CANADIAN PRESS/ Patrick Doyle

Even as Trudeau was asserting the provinces and territories “are all in this together,” it was painfully apparent that major divisions remain.

Carbon pricing, said Trudeau, “will apply across 100 per cent of this country” starting at a minimum $10 per tonne of emissions in 2018 – a shot fired squarely across the bow of the most vocal holdout, Saskatchewan’s Brad Wall.

It’s just one part of a wide suite of climate policies designed to push Canada toward its international 2030 climate pledge to cut emissions 30 per cent below 2005 levels by 2030.

The measures include previously announced policies on everything from clean technology and green infrastructure to electric vehicles and building efficiency – but there was no detailed accounting of the associated greenhouse gas reductions.

A graphic at the end of the framework asserts the plan pulls Canada within 44 million tonnes of the 524-million tonne GHG goal – a gap that can be closed with “additional measures such as public transit and green infrastructure, technology and innovations, and stored carbon (forests, soils, wetlands).”

The hard math of cutting greenhouse gases, however, was all but lost in the furious politicking Friday.

B.C. Premier Christy Clark, who is facing an election next spring, said she’d won a “B.C. annex” in the final agreement that will allow her province to effectively opt out of the annual $10 a tonne increase in carbon pricing once the rest of the country reaches B.C.’s current $30 per tonne price in 2020.

Not so, Environment Minister Catherine McKenna told The Canadian Press after the closing new conference.

Alberta Premier Rachel Notley, meanwhile, said that while her province is bringing in its own $20 per tonne tax next month, she didn’t buy Clark’s contention that western provinces will be paying twice the carbon price of Quebec and Ontario in five years.

“I’m not entirely convinced that as of 2022 that that would be what the numbers are,” Notley said.

Manitoba’s Brian Pallister, who has been pressing the federal government for concessions on health care funding, withheld his support solely for the purpose of extracting additional help from Ottawa in dealing with escalating health costs.

And Wall and Trudeau openly squabbled during the closing news conference as the two continued a debate that appeared to have started behind closed doors.

At one point Trudeau rolled his eyes and shook his head in apparent exasperation at what the Saskatchewan premier was saying.

One such exchange happened when Trudeau was asked how the election of Donald Trump as U.S. president might impact his climate mission.

Trudeau shared the message delivered by U.S. Vice-President Joe Biden, who sat down with the premiers earlier Friday, and tried to allay concerns about a derailed fight against climate change by saying many of the trends towards cleaner energy were well established and would continue.

But then Wall said the Canadian government would want to bring its values on climate change – including carbon pricing – into trade negotiations, potentially including NAFTA, which he thinks would not go over well with Trump and the other Republicans now dominating Capitol Hill.

Trudeau shot back: “I think all Canadians know that Canadian climate policy will be set by Canadians, not by whoever happens to be president of the United States.”

At another point, Wall questioned the point of imposing a carbon tax on Saskatchewan’s citizens and then simply refunding it to them, as Trudeau said he was free to do.

“What’s the point? How does that change behaviour?” Wall asked.

“There’s a lot of good analyses of how impactful carbon pricing is and I recommend it to everyone to take a look at,” Trudeau said with a tight smile.

Wall is ideologically opposed to the idea of a carbon tax; B.C. already has a carbon tax but Clark wanted – and seemed to get – assurances that Ontario and Quebec’s cap-and-trade carbon market would impose an equivalent carbon price.

And it was Clark who came closest to scuttling the whole deal Friday.

Minutes after she broke from the talks late Friday to tell reporters no agreement was likely imminent, word emerged of a compromise that accommodated Clark’s concerns.

Quebec’s carbon market is currently trading permits for about $8 per tonne, with a forecast the price will rise to $16 per tonne once Ontario’s market is fully up and running with Quebec and California in the Western Climate Initiative.

Clark said that’s not fair to provinces like B.C. and Alberta with carbon taxes of $30.

However, Paul Boothe, an economics professor at the Ivey Business School and member of the non-partisan Canada’s Ecofiscal Commission, said there’s no reason provinces must have identical tax rates, pointing to differing provincial sales and income taxes across Canada.

“I think this fairness discussion is a bit of a red herring,” Boothe, a former deputy finance minister in Saskatchewan, said in a telephone interview.

“What we’re trying to do is meet our (emissions) target at the lowest possible cost, not the highest cost.”

Ideally, B.C. and Alberta companies should be free to buy carbon credits from other jurisdictions instead of paying the carbon tax, which would ensure emissions reductions are achieved at the lowest price available.

Whether such a trading plan emerges remains for another day. Clark insisted B.C. might find another option for cutting emissions in 2021 rather than raising the province’s carbon tax, as per Ottawa’s stipulation.

Trudeau put his best face on a hard-won and seemingly fragile compromise.

“I want to thank all of the premiers for being here today, for coming into this meeting with some strongly held views, but also with a willingness to work hard on behalf of all Canadians.”

– With files from Joanna Smith