TORONTO – A house explosion west of Toronto that killed one woman this week is now a criminal investigation, but investigators aren’t ruling out the possibility that it was an accident. 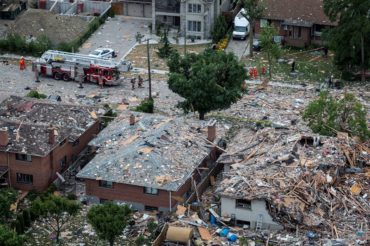 Peel Regional Police Sgt. Josh Colley said the home in Mississauga is associated with Robert Nadler and Diane Page, but police have not been able to contact either of them.

Colley said police have not determined the identity of the woman found dead at the scene, but an autopsy was scheduled for Thursday.

“As of right now, there have been no other victims found at the scene,” he said. “We’re working with the (Ontario Fire Marshal) and the fire department to deem the site safe before we can go on and locate any further victims, if there are any.”

Media reports have said there were handwritten notes found near the scene of the blast, and police said they’re working to find out whether the papers are related to the explosion.

“Because the blast site was so large and there were multiple homes that were damaged, it’s an extensive process to try to match up handwriting analysis,” Colley said. “So they’re working on trying to associate those documents with an address.”

Jeff Minten from the Ontario Fire Marshal said investigators were set to begin searching the debris on the blast site to determine the cause of the explosion. A canine search-and-rescue team has already been through the scene.

“We’re going to be excavating that very slowly. We’re going to be looking for fragile debris that might have been associated with the blast,” he said. “Part of that is we’re also going to conduct a search to determine if there are human remains.”

Mississauga Fire Chief Tim Beckett said 69 homes in the area are still under an evacuation order. There were about 700 houses initially affected by the blast, but most people have been able to return to their homes, he said.

Authorities need to restore gas and hydro to the houses in the evacuation zone before people can return, Beckett said.

“As much as I would love to get every single resident back into their neighbourhood there, we have to do this systematically and make sure it’s safe for them,” he said.

An information hub for area residents is being set up at a nearby community centre.