PORTLAND, Ore. – A major snowstorm spread Wednesday through Portland and parts of Washington state – toppling trees, closing schools and cutting power to thousands in the heaviest snowfall for the city since at least 2008. 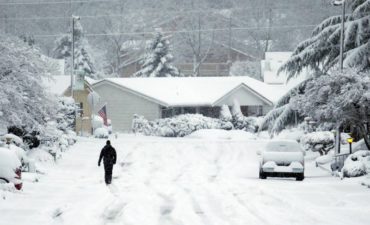 Some Portland neighbourhoods got more than a foot of snow, a rare event in a city known for its rain.

Snow that started falling Tuesday was still coming down Wednesday before tapering off around noon. The storm’s intensity surprised meteorologists, with most expecting no more than 4 inches.

“We are going to be analyzing this one, because this is a special one,” National Weather Service meteorologist Treena Jensen said.

“As snow continues to accumulate and local authorities respond to provide core services and clear roadways, all available state resources will be made available to ensure the safety of communities throughout Oregon,” Brown said in a news release.

The state declaration allows the deployment of the Oregon State Police and the Oregon National Guard to support communities needing assistance and also allows for aid in recovery efforts related to the storms. Wheeler’s decision could allow the release of money to help handle the weather’s impact, particularly on infrastructure and homeless people.

Portland has many homeless residents and four people have died of hypothermia since Jan. 1. Portland police Sgt. Pete Simpson said officers took about three dozen homeless people to warming shelters during the storm. Jackets were given to some who refused to leave the outdoors.

Temperatures were expected to remain at or near freezing before hitting 50 degrees early next week. Meteorologists said they are concerned about flooding when the temperatures rise.

The storm arrived in a Pacific Northwest winter that has been unusually cold, punctuated by several snow and ice storms.

The snow began at the end of Tuesday’s rush-hour commute, so the roads were free of heavy traffic during the storm. Still, some vehicles jackknifed, spun out or were left abandoned by fearful drivers on Interstate 5 and other highways.

The Oregon Department of Transportation urged drivers to retrieve their vehicles Wednesday and free up space for snow plows and sanders. The agency also warned drivers to stay home, if possible.

“The timing of this was definitely fortuitous,” ODOT spokesman Don Hamilton said. “When these kinds of storms happen in the middle of the working day, at noon or 2 p.m., it can be very tricky.”

He added: “But we still had a big rush of cars coming out at 8 or 9 o’clock, right when the storm was at its fiercest, and that’s where we had a lot of the problems.”

In the central part of the state, the Grant County Sheriff’s Office warned motorists to stay off roads, saying snow drifts of 3 to 5 feet made them impassable.

Deputies were checking on stranded motorists, but calls for law enforcement services not deemed life-threatening were expected to take hours to resolve.

Portland’s light-rail trains and streetcars were hobbled by frozen switches, downed trees and fallen power lines. Service was reduced and shuttle buses were needed. Portland International Airport was open, but many flights were cancelled or delayed.

Though the snow began late in the day Tuesday, the National Weather Service said enough fell by midnight to make it the snowiest calendar day the Portland area since Dec. 20, 2008. When Wednesday’s total is included, it might be the city’s biggest snowfall of the 21st century.

“Events like this are so rare that in many ways it’s not surprising that our weather models did not pick up on the whole situation,” Jon Bonk, a weather service meteorologist.

“Most forecasters, if they spend a 30-year career here in Portland, they (probably) get three times to experience something like this,” he added.