WINNIPEG – Electricity is back on in all communities that lost power two weeks ago, when Manitoba was hit by a major snowstorm that brought down power poles and transmission towers. 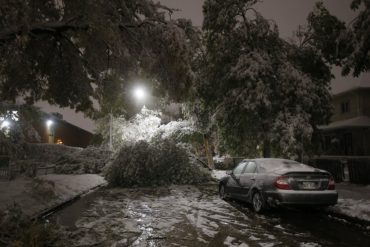 An early winter storm with heavy wet snow caused fallen trees, many on cars, and power lines in Winnipeg early Friday morning, October 11, 2019. Snow clearing crews were forced to hit the streets to clean up the damage. THE CANADIAN PRESS/John Woods

The Thanksgiving weekend storm hammered Winnipeg, southwestern Manitoba and the Interlake region to the north, leaving about 53,000 people without power and prompting Premier Brian Pallister to declare a state of emergency.

The Crown utility says restoration of power has opened the way for those who remain out of their homes to return to their communities.

Crews from SaskPower, Hydro One in Ontario and Minnesota Power came to help with repairs but have also returned home.

Pallister thanked employees for working tirelessly to speed up the recovery effort.

“There is more work to do, certainly. But as we’ve seen these past two weeks, we can accomplish anything when all of us work together,” he said in a news release Friday.

Manitoba Hydro president Jay Grewal added that it was a “huge challenge.”

The utility still must clean up broken poles, transformers, overhead wires and other materials that were left behind as new power lines were built. People are being asked to leave the material in place until it’s picked up.

The cleanup is expected to last until mid-November.

This report by The Canadian Press was first published Oct. 25, 2019.