Powerful aftershocks have shaken New Zealand since a magnitude-7.8 earthquake struck South Island near Hanmer Springs at 12:02 a.m. local time on Nov. 14, some as strong as magnitude-6.5, AIR Worldwide said on Monday. 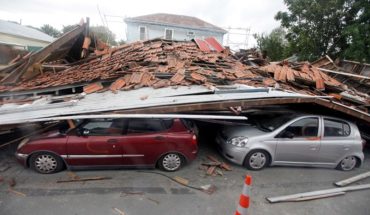 FILE – In this Feb. 26, 2011 file photo, cars lie crushed under a fallen building in central Christchurch, New Zealand, following a magnitude 6.3 earthquake. A powerful earthquake struck New Zealand on Monday, Nov. 14, 2016, reminding many of the quake that hit the nation in February 2011 and devastated the city of Christchurch, the country’s second-biggest city. (AP Photo/Mark Baker, Pool, File)

Although damage has been relatively light, the catastrophe modelling firm said in a press release, many roads remain blocked from ground failure and landslides, numerous power outages have been reported, and water and sewer services has been interrupted in some locales. At least two people have died.

The epicenter is about 93 kilometres north-northeast of Christchurch, which is still recovering from a pair of earthquakes in late 2010 and early 2011. The initial earthquake struck in a relatively sparsely populated area of South Island and at a time when most people were asleep and the roads were clear, which helped reduce the number of casualties, AIR said in the release.

Someone was in that house. The driveway shows how far it moved (Photo from @alexperro RNZ) #eqnz pic.twitter.com/lHcumDF8nF

The M7.8 earthquake that struck South Island was the strongest to hit the country since the 2009 M7.8 Dusky Sound earthquake. Some reports indicate that the initial event – which lasted up to two minutes – included two quakes, one thrust-fault and the other strike-slip. The earthquake occurred in a “seismically complex area” where the Hikurangi subduction zone is transitioned into the Alpine crustal fault through the Marlborough fault system.

The M7.8 quake was felt from Christchurch on South Island to Wellington and as far as Auckland on North Island. The U.S. Geological Survey reported that during the first nine hours after the initial quake, 25 M4.5 to M6.5 aftershocks occurred, extending 160 km northeast from the epicenter. The numerous aftershocks have been distributed from the northern part of South Island, notably near Seddon and Kaikoura, to Paraparaumu and Wellington on North Island, which have experienced M4.9 temblors. Many seismologists expect aftershocks to continue for a few months, with some temblors as strong as M5.0, AIR reported.

Although damage has been somewhat lighter than might be expected from an M7.8 temblor, the earthquake – and the numerous aftershocks – have had widespread impacts, AIR said. Throughout the region, glass has been broken in buildings, chimneys have collapsed and some structural damage has occurred. Building contents breakage has occurred widely, as shelves collapsed, cupboards opened, and furniture and equipment shifted and toppled. Debris from damaged buildings and landslides has also damaged some vehicles. Power outages, disruption of water and sewer services and interruption of phone service (including emergency numbers) have impacted some communities. On South Island, the coastal town of Kaikoura has been cut off from the rest of the islands by road-blocking landslides; helicopters and a navy ship have been pressed into rescue service to evacuate as many as 1,000 residents and tourists.

According to AIR, earthquake risk to communities in New Zealand is partially mitigated by stringent and rigorously enforced national building codes. For example, the New Zealand building code has prohibited the use of unreinforced masonry (URM) in new structures since 1965. In addition, innovative construction methods that minimize building damage from earthquakes, such as base isolation, have been pioneered in New Zealand. The standards for commercial building types (e.g., reinforced concrete, steel, and masonry veneer) and residential building types (e.g., reinforced masonry and timber frame), are constantly updated in the New Zealand building code to reflect improved understanding of how these construction types respond to ground shaking.

Robert Muir-Wood, the chief research officer at Risk Management Solutions, Inc., said in a statement on Monday that “the most spectacular damage has come from massive landslides blocking the main coast road Highway 1 that is the overland connection from the ferryport opposite Wellington down to Christchurch. This will take months or even years to repair.”

“Therefore it appears the biggest consequences of the earthquake can be expected to be logistical, with particular implications for any commercial activity in Christchurch that is dependent on overland supplies from the north,” Muir-Wood said. “As long as the main highway remains closed, ferries may have to ship supplies down to Lyttelton, the main port of Christchurch.”