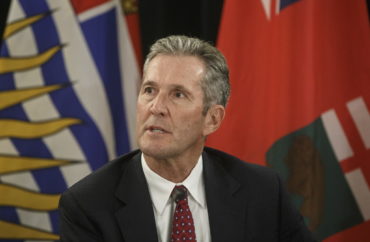 Premier of Manitoba Brian Pallister speaks to media during the Western Premiers’ conference, in Edmonton on Thursday, June 27, 2019. THE CANADIAN PRESS/Jason Franson

Manitoba Premier Brian Pallister has pledged to drop provincial sales tax from home and renters’ insurance should he be re-elected in this fall’s election.

The announcement received positive reviews from the Insurance Brokers Association of Manitoba. “I’m sure this would be good news for consumers of insurance and homeowners in Manitoba,” said chief executive officer Grant Wainikka. “Brokers will service and support customers to the best of our ability irrespective of the tax environment.”

Insurance Bureau of Canada is also on board with the proposal. Celyeste Power, IBC’s western vice president, said reducing taxes on consumers and businesses is good strategy.

“As insurers are responsible for collecting PST on behalf of the government, this will help reduce the cost of insurance for Manitobans,” she said in an email. “It will also make the tax system more efficient, again removing costs from the system. IBC advocates for better taxation methods and lower taxes on insurance consumers across the country.”

Pallister’s promise would reverse the move made by the then-governing New Democratic Party in 2012, when the 8% sales tax was added to home insurance. On July 1, 2019, the provincial sales tax was reduced to 7%.

Asked whether getting the tax removed was a priority for the association, Wainikka told Canadian Underwriter that “IBAM and brokers advocate for the consumers of insurance on an ongoing basis.”

The election campaign doesn’t officially start until next month. But that didn’t stop Pallister form making the announcement, saying the tax on these coverages makes life harder for families.

“I would suggest that you go home and you check your own home insurance policy, and then you take 8% off that and ask yourself, ‘when does this renew’ and then start counting those extra dollars,” he told reporters. “For a lot of Manitobans, those dollars are going to be very, very important for them to have and for them to use to find more security in their lives.”

Pallister’s Progressive Conservative Party estimated the move would save households $70 per year, but did not say how much it would cost the province. The premier also said further tax cuts would be central to his re-election campaign, according to The Canadian Press. He didn’t elaborate when asked if PST would also be removed from other types of insurance such as life insurance.

“We’ll be announcing other items as we move through the pre-election period,” he said. “And as we do that, I’m sure that Manitobans will be pleased to know that they have a government that’s serious about making life better for them.”

Other Canadian provinces have made moves to remove taxes from insurance products. Newfoundland and Labrador eliminated the 13% tax on auto insurance renewal statements under its 2019 budget. Saskatchewan announced last year that there would no longer be a provincial sales tax on agriculture, life and health insurance premiums.

Neither the NDP nor the Liberals in Manitoba have made similar pledges, nor have they indicated that they will. In interviews with local media, NDP and Opposition leader Wab Kinew and Liberal leader Dougald Lamont both put the focus on the high house prices and increased rental costs as roadblocks.

Manitobans go to the polls on Sept. 10.

1 Comment » for Premier promises to take PST off home insurance