Premiums earned up 4%, catastrophe losses up 181% at Allstate

First-quarter underwriting income dropped about 73% year-over-year for The Allstate Corp. in the wake of two large hailstorms in late March in the southern United States.

The Northbrook, Ill.-based insurer reported May 4 that catastrophe losses were $827 million during the three months ending March 31, up nearly threefold from $294 million during the same period in 2015. All figures are in U.S. dollars. 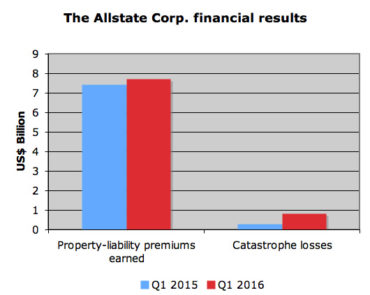 Underwriting income dropped from $467 million in Q1 2015 to $125 million in the most recent quarter.

“Two severe hail events, primarily impacting the state of Texas in March, accounted for two-thirds of the catastrophe losses for the quarter,” Allstate said in a release April 21. “The larger of the two storms occurred on March 23, 2016, extended from Texas to Florida and produced violent thunderstorms with 2.5-inch hail and 65 mph winds in Texas, and 1-inch hail and similar winds in Florida.”

Allstate said April 21 that the smaller of the two hail events “occurred during morning rush hour on March 17, 2016 and produced hail as large as 2.75 inches in Texas and 1.75 inches as it moved east into Louisiana. The cities of Fort Worth and Arlington, Texas, saw the greatest amount of damage from the storm.”