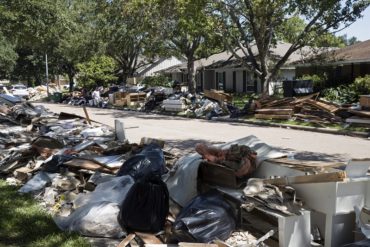 FILE – In this Sept. 7, 2017 file photo, flood damaged debris from homes lines the street in the aftermath of Hurricane Harvey in Houston. One month after Harvey dumped record rainfall in the Houston area, many neighborhoods and suburbs of the nation’s fourth largest city continue cleaning up after the storm. While the larger shelters have closed and much of the city has gone back to normal, huge piles of debris still line streets in numerous neighborhoods as many residents try to salvage their homes. (AP Photo/Matt Rourke, File)

Historically, NFIP losses have been excluded from PCS’ industry insured loss estimates, the Verisk Analytics business noted in a press release. “With this combined effort, PCS loss estimates will provide a fuller view of catastrophe losses across the country.”

“PCS and the NFIP agree that this collaboration represents an important step forward for risk and capital management regarding flood risk in the United States, particularly in light of the NFIP’s decision to secure reinsurance protection earlier this year,” PCS said in the release. “The additional reporting through PCS – the world’s leading catastrophe loss aggregation platform – adds a new area of support for the global insurance and reinsurance industry.”

PCS will publish NFIP losses only for PCS-designated catastrophe events.

PCS added that it is in the process of developing a database for NFIP catastrophe loss data that will be maintained separately from the existing PCS database for insured losses from catastrophe events for at least 12 months. PCS arrived at this decision to ensure that forms of reinsurance protection currently in force, such as industry loss warranties (ILWs), are not unexpectedly affected. After that waiting period, NFIP losses will likely be added to the U.S. database as a fourth and separate category alongside auto, personal, and commercial.

From this point forward, PCS suggests that ILWs and other forms of risk transfer that reference PCS data specify the classes of business included, instead of simply using a PCS insured loss total in the trigger.

“The ILW market provides an important source of capacity for insurers and reinsurers worldwide, and we want to respect the careful efforts made for the risk-transfer transactions currently in force,” explained Tom Johansmeyer, assistant vice president of PCS. “With this in mind, we encourage companies planning new ILWs or catastrophe bonds to contact us with any questions.”

Existing PCS subscribers will be notified when the database of NFIP loss information is completed.

Roy E. Wright, the Federal Emergency Management Agency’s NFIP director, said that he sees this development as an opportunity to better integrate with the insurance industry. “This better understanding of flood losses is in the interest of FEMA and our private sector partners,” Wright said. “It can deepen the understanding of flood risk as the industry explores broader use of private lines in this space.”

Johansmeyer reported that the combined PCS and NFIP effort is the “direct result of requests from our clients around the world to report NFIP losses, particularly in light of the program’s recent engagement with the global reinsurance community. Improved reinsurer risk and capital management should benefit both the NFIP and the policyholders it protects.”

PCS director Ted Gregory said that with Hurricanes Harvey, Irma and Maria, flood losses are expected to be a significant portion of the insured losses. “Both insurers and independent adjusters can serve claimants more effectively when they have access to more event-specific data. With demand for claims-related services escalating rapidly because of the three storms, I’m proud that PCS is in an immediate position to help.”