FREDERICTON – The New Brunswick government will compensate cottage owners whose properties were damaged by record-breaking flooding, while also requiring residents to develop plans to mitigate against future floods. 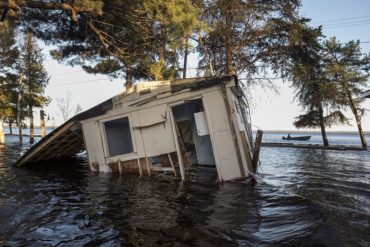 A cottage rests toppled in water after being battered by floodwater from the Saint John River on Grand Lake in New Brunswick on Friday, May 11, 2018. THE CANADIAN PRESS/Darren Calabrese

The river – swollen by heavy rains and snow melt – swamped homes throughout the region and caused some cottages to collapse, with some even floating off their foundations.

“Providing assistance to recreational property owners will ensure potential health and safety risks are removed and the natural environment in these communities is restored,” Harvey said at a briefing Wednesday.

“We can’t leave properties affected with contaminants or garbage, furniture (and) appliances that washed up on people’s properties. We need to have this program so that people can clean up their own properties.”

Particularly hard hit was the Grand Lake area, where recreational properties were inundated with water and debris was scattered throughout the popular summer vacation spot.

Harvey said cottage owners must apply for the financial relief and that payments will be capped at $6,100 to help clean up their property. The money can be used for labour and contracted cleanup costs. Claims will be assessed by adjusters after property owners register the damage with the province by phone or online.

“There could be 2,000 recreational properties that could be affected by the flooding,” he said, adding that officials don’t yet know how much the new compensation will cost.

The province said it will also require people to submit plans that include new mitigation conditions before permits will be issued under the Watercourse and Wetland Alteration regulation.

Harvey said people wanting to do work on their property must have the permit if within 30 metres of a waterway. This includes new building construction, reconstruction or expansion of existing buildings.

He said the goal is to reduce the likelihood that a building or its contents will be damaged by flood. The fees for permits will be waived to encourage people to comply.

Greg MacCallum, director of the Emergency Measures Organization, said about 1,800 people have so far registered with the Disaster Assistance Financial Program, which is for primary residences damaged in the flooding.

“It’s too early to have a complete picture of the magnitude of this, but the damage we have seen so far is truly devastating,” he said.