“The increase in the combined ratio for the three months ended March 31, 2016 compared to the same period of 2015 was driven by a reduction in the Non-life technical result, mainly due to a lower current accident year technical result, lower net favorable prior year loss development and higher expenses as a result of the vesting of stock-based awards,” PartnerRe stated in a filing with the United States Securities and Exchange Commission. All dollar figures are in U.S. currency. 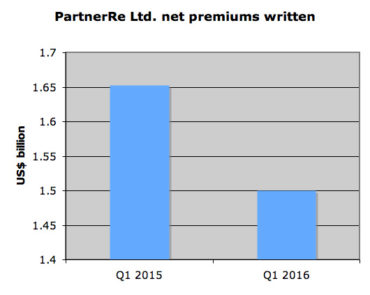 PartnerRe Ltd., which has a Toronto branch office, reported May 2 its financial results for the first quarter. In addition to reinsurance, Pembroke, Bermuda-based PartnerRe writes commercial auto, agriculture, aviation/space, credit/surety, engineering, energy and marine, among others.

Since March 18, PartnerRe has been 100% owned by EXOR S.p.A., a Turin, Italy-based investment firm owned by the Agnelli family.

PartnerRe was ranked ninth, by A.M. Best Company Inc., on a list of the top 50 global reinsurance groups. Those groups were ranked – in an A.M. Best report released Sept. 2, 2015 – by gross reinsurance premiums written, in life and non-life, in 2014.

The US$6.9-billion acquisition agreement by EXOR was announced in August, 2015 and approved three months later by PartnerRe shareholders.

EXOR originally announced an offer to acquire PartnerRe April 14, 2015, but at the time, PartnerRe’s board was recommending shareholders approve a merger agreement – initially announced Jan. 25, 105 – with Axis Capital Holdings Ltd., another Pembroke, Bermuda-based carrier that also writes reinsurance and commercial primary insurance. EXOR increased the value of its offer several times before the PartnerRe board recommended shareholders vote in favour of the EXOR acquisition rather than a merger with Axis Capital. Had PartnerRe merged with Axis, the firms would have formed a “global top 5 reinsurer,” Axis Capital said in January, 2015.

In addition to PartnerRe, EXOR also owns: a significant minority of Fiat Chrysler Automobiles N.V.; a significant minority CNH Industrial N.V., which makes powertrains as well as the Case and New Holland brands of farming and construction equipment; The Economist magazine; and the Juventus Football Club. In September, 2015, EXOR completed the sale of real estate management firm Cushman & Wakefield.

EXOR chairman and CEO John Elkann – also chairman of Fiat Chrysler – was appointed chairman of the board of PartnerRe when the acquisition closed. EXOR initially appointed Mario Bonaccorso to the board, but the firm announced April 5 that Bonaccorso is now PartnerRe’s new chief financial officer. As such, Bonaccorso has resigned from the PartnerRe board and as managing director at EXOR.

Bonaccorso, a former research and development telecom engineer at Qualcomm Inc., was born in Italy in 1976.

PartnerRe announced March 24 the appointment of Emmanuel Clarke as chief executive officer. David Zwiener had been CEO on an interim basis since January 2015. Zwiener had temporarily replaced Costas Miranthis, who stepped down as PartnerRe CEO when the proposal to merge with Axis Capital was announced. The plan at the time was for Zwiener to serve as interim CEO until the merger with Axis was completed. Zwiener had been chairman of the PartnerRe board of directors’ audit committee. He is a former president and chief operating officer of the property and casualty operations at Hartford Financial Services Group Inc.