Reinsurance provider and commercial specialty carrier Axis Capital Holdings Ltd. reported Tuesday its financial results for the second quarter, reporting a 76% increase in net income but a combined ratio of 102.2%, after large losses including the Alberta wildfires and the earthquake in April in Ecuador. 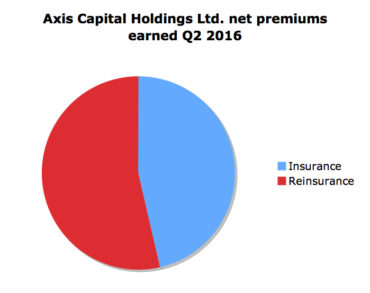 “During the quarter, we were tested by 20 catastrophe and weather events globally generating estimated insured losses in excess of $19 billion – amongst the highest industry loss quarters in the last decade,” president and chief executive officer Albert Benchimol said in a release.

During the second quarter, Axis Capital estimated its catastrophe and weather-related pre-tax net losses, net of reinstatement premiums, at $104 million. Of that, $41 million was in primary insurance and $63 million was in reinsurance. Those losses included the wildfires that started in May near Fort McMurray, Alberta, as well as “U.S. weather-related events, Japanese and Ecuadorian earthquakes and European floods.” 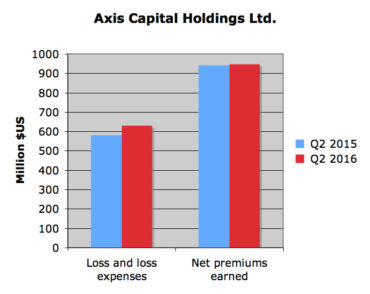 In 2015, Axis Capital reached a tentative agreement to merge with PartnerRe Ltd., which also has a Toronto office and is based in Pembroke, Bermuda. However, PartnerRe ended up being acquired instead by Turin, Italy-based EXOR S.p.A., an investment firm whose other holdings include significant minority stakes in Fiat Chrysler Automobile and the CNH Industrial, which makes Case and New Holland heavy equipment as well as power trains.

Net premiums earned in the latest quarter were $439 million in insurance and $507.7 million in reinsurance.

In reinsurance, Q2 net premiums earned were up 4% year-over-year (8% on a constant currency basis) “primarily driven by strong growth in business written” in liability, marine and other and catastrophe lines in recent periods, Axis Capital reported. This was “partially offset by a decrease in business written in our property lines as well as an increase in the premiums ceded, reflecting retrocessional covers purchased largely in our catastrophe and property lines.”