Everest Re Group Ltd. announced Monday that the net impact of three catastrophes – including the Fort McMurray wildfire – was $105.4 million in the three months ending June 30.

“Catastrophe losses, net of reinsurance, amounted to $123.8 million in the quarter, with current quarter catastrophe losses for the Fort McMurray, Canada wildfires, Ecuador earthquake, and Texas hailstorms totaling $149.1 million, offset by reserve releases on several 2011 events,” Hamilton, Bermuda-based Everest Re stated in a release announcing its financial results. “The net impact of these losses, after reinstatement premiums and taxes was $105.4 million.” 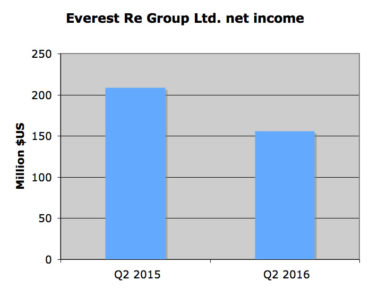 In April, an earthquake measuring 7.8 on the Richter scale killed hundreds in Ecuador. The same month, Texas was hit by three major hailstrorms in San Antonio and another in the Dallas-Fort Worth area. The wildfire that started the following month in Northern Alberta resulted in the evacuation of Fort McMurray. Catastrophe Indices and Quantification Inc. (CatIQ) announced July 6 it estimated insured damage at $3.58 billion, 62% of that in personal property.

In its financial results Monday, Everest Re reported net premiums earned of $1.289 billion in three months ending June 30, up from $1.285 billion in Q2 2015. The company reported its Q2 gross written premiums increased 10% year-over-year when “eliminating the unfavorable effects of foreign currency fluctuations.”

In a separate release Monday, Everest Re said it signed a letter of intent to sell Topeka, Kansas-based Heartland Crop Insurance Inc. (which Everest Re acquired in 2011) to CGB Diversified Services Inc. The sale is subject to closing conditions, including regulatory approval. 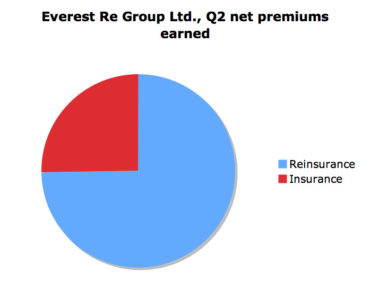 Everest Re was the global reinsurance group that ranked 10th by A.M. Best Company Inc. in a report released Sept. 2, 2015. That report included a list of the top 50 reinsurance groups when ranked by gross written premiums – including life – in 2014. A.M. Best counted the Lloyd’s market as one group. If listed by non-life gross written premiums in 2014, Everest Re would have ranked seventh – behind Munich Re, Swiss Re, Hannover Re, Berkshire Hathaway, SCOR and the Lloyd’s market.