Wildfires in Tennessee, an earthquake in New Zealand, Hurricane Matthew and energy-related losses all contributed to a 20.2-point deterioration in the fourth-quarter loss ratio in reinsurance for Aspen Insurance Holdings Ltd., while in primary insurance, Aspen reported a combined ratio of 109.1% in Q4 as net premiums written in marine, aviation and energy dropped more than 40% year over year. 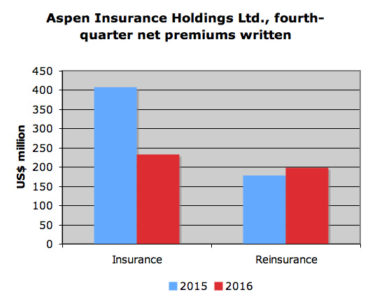 Aspen reported earlier it had “significantly reduced its appetite for Programs business and Primary Casualty.” 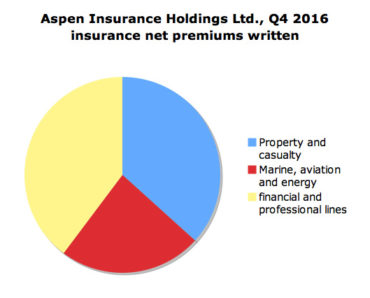 In financial and professional lines, Aspen writes financial institutions coverage both on a primary and excess of loss basis, the company said in its annual report for 2015. Financial lines includes “professional liability, crime insurance and D&O cover, with the largest exposure comprising risks headquartered in the U.K., followed by Australia, the U.S. and Canada,” Aspen said at the time.

Aspen U.K.’s primary coverages include professional liability – for lawyers, accountants, architects, engineers, doctors and medical technicians, among others – in the U.S., Britain, Australia and Canada.