Aging infrastructure and deteriorating construction standards are among the “major factors” leading to the challenges Canadian property insurers face when dealing with water losses, brokers heard Thursday during the CEO Panel at the Insurance Brokers Association of Ontario convention. 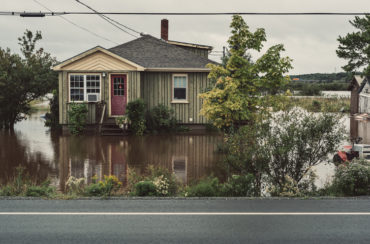 “The issues we have both with overland water and water within homes is, I would say, a global phenomenon, particularly in the northern hemisphere,” said Martin Thompson, president and CEO of RSA Canada. “There are a couple of major factors. One is construction standards have fallen quite materially.”

Thompson made his remarks in reply to a question from Jim Harris, who moderated the CEO Panel, held at the Shaw Centre in Ottawa.

“The quality of the products and the quality of the workmanship in construction today is nowhere near as high as it used to be and we see a lot of the products being used are not as good as they used to be, so I think that is one issue,” Thompson said. “The second challenge is, because we live in a post-industrial society, we have a very aged infrastructure almost across Canada.”

Harris asked Thompson whether he sees similarities in water damage between RSA Canada’s businesses in Canada and in Europe.

In 2016, the British government launched Flood Re, a special purpose vehicle and a not-for-profit monoline reinsurer that is subsidized by a tax levied on all carriers writing home insurance in the nation. This creates a cross-subsidy from about 98% of the British population to high-risk property owners, suggested Brendan McCafferty, then Flood Re’s chief executive officer, in 2015 at MSA Research Inc.’s National Insurance Conference of Canada in Montreal.

In Britain, the industry “had to lobby the government quite extensively almost to the point of the industry threatening to withdraw flood coverage in order that we could actually get them to start investing in flood defences,” Thompson said Oct. 26, 2017 at the IBAO Convention.

RSA Insurance became the third Canadian insurer (after Aviva and The Co-operators) to announce residential flood coverage in the country, in 2015. At the time, RSA said new sewer back-up wording that would be more restrictive than in the past.

During its annual Canadian briefing in Toronto this past September, A.M. Best Company Inc. showed industry professionals a list of the most expensive P&C catastrophe losses in Canada over the past 25 years, ranked by loss and loss adjustment expenses.

Two flood events in 2013 (one affecting southern Alberta and the other affecting the Greater Toronto Area) placed third and fourth, with industry-wide losses of $1.8 billion and $996 million respectively. The Fort McMurray wildfire ranked first while the 1998 ice storm ranked second, with A.M. Best reporting inflation-adjusted losses of $4 billion and $2.2 billion respectively. Ranking sixth was an August, 2005 rain storm that affected Toronto and caused the Finch Avenue bridge over Black Creek to collapse.

The 2013 floods in Southern Alberta had total economic losses of about $6 billion, Bill Adam, vice president western and Pacific for IBC, said in July 2016 during a press conference on the Fort McMurray disaster. Adam noted at the time that the insured loss from the 2013 flood was much lower than the total economic loss because the insured loss was mainly from sewer backup, whereas overland flood coverage for residential properties was generally unavailable in Canada at the time.

At the 2017 IBAO Convention CEO panel, Harris asked Intact Insurance president Jean-Francois Blais about the Intact Centre on Climate Adaptation at the University of Waterloo.

“We are trying to create two outcomes,” Blais replied. “The first one is to create new codes for building either buildings or municipalities especially on wet lands especially all the infrastructure around the municipality and second, also driving new codes to build a house.”

Thompson told IBAO Convention attendees that the insurability of some properties in Canada, for overland flood, “will remain a challenge and therefore we need to find a solution for those consumers that are going to be excluded.”

Such a solution, Thompson suggested Thursday, is “going to require a multi-party effort between the industry and government.”

“No model is perfect, wherever in the world you look,” Moini said at the time, during a panel titled Natural Catastrophes and Climate Change Implications panel. “There isn’t something that is a lift and shift directly to Canada.”

In Insurance Brokers Association of Canada’s flood principles document, IBAC said last year that personal flood insurance should be “available to Canadians who need insurance,” and “must be affordable.”

IBAC said in its document that “there must be a partnership of the public and private sectors that is clearly understood by all.”

In the United States, the National Flood Insurance Program lets property owners in certain areas buy flood coverage. In some cases, premiums are subsidized. The program was originally going to expire Sept. 30, but on Sept. 8, a bill extending NFIP to Dec. 8, 2017 was passed into law.