MONTREAL – The amount of financial assistance available for people dealing specifically with the aftermath of heavy flooding this year has been topped up, the Quebec government announced Wednesday. 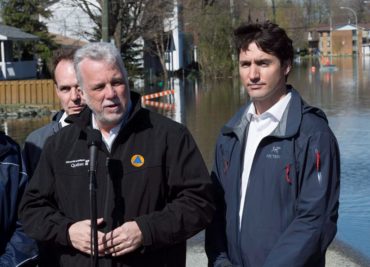 Thousands of Quebecers will likely be seeking help after record April rainfall caused extensive flooding across the province, ruining homes and businesses.

That $200,000 cap will also apply to repairs, while the percentage of amounts covered is being increased to 90 per cent from 80 per cent.

The money being doled out for other material losses is being increased and the province says owners of rental properties are also eligible.

The new measures announced Wednesday apply to this spring’s flooding, which the premier qualified as exceptional.

While the maximum amounts aren’t likely to cover the cost of rebuilding a home, Couillard said there has to be a limit.

“There is no program anywhere without a ceiling, you have to control expenses at some point,” he said. “It’s not an insignificant amount (as much as $250,000), I realize that in certain very expensive homes, it’s not going to cover everything, but if you look at the income of Quebecers … it will cover a significant share of the population.”

Public Security Minister Martin Coiteux said the compensation program as a whole is also being revised.

Meanwhile, Coiteux and other ministers will look at planning for the future – in particular new development projects in areas deemed to be flood risks.

But the premier said forcing people from their homes is out of the question. If homeowners want to move, it will be their choice but they will be allowed to rebuild as long as municipal zoning laws permit, he added.

“I’m respectful of people – I visited Pointe-Gatineau (a district in western Quebec), it’s low-to-middle-income people there and some of them have been living there for three generations,” Couillard said. “I’m not going to tell them: ‘Please pack your things, we’re moving you away.’

“That’s not they way we’re going to behave with citizens.”

Couillard said the province’s improved financial situation will allow the province to shoulder the costs without affecting its balanced budget.

The province said it has paid out $3.6 million so far in financial assistance, with the pace of payouts working out to $450,000 per day.

Civil security officials say just more than 4,000 residences are affected by flooding and about 3,500 people remain evacuated from their homes.