MONTREAL – Taxi companies and drivers across Quebec are claiming a first victory in their battle against Uber after a judge on Monday authorized their class action against the ride-hailing company. 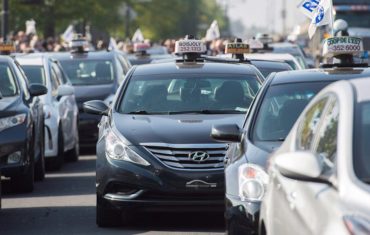 Taxi cabs block a street during a demonstration opposing the presence of Uber in the province of Quebec, in Montreal on Wednesday, October 5, 2016. THE CANADIAN PRESS/Graham Hughes

The taxi industry is seeking “hundreds of millions” against the U.S.-based firm, said Marc-Antoine Cloutier, a lawyer representing drivers, owners and their union.

“Uber has made revenues nosedive for drivers and owners of taxis and limousines across Quebec,” Cloutier alleged.

The lead plaintiff in the case is Wilson Jean-Paul, a taxi owner and spokesman for the union representing 4,000 drivers in Quebec.

Cloutier said the lawsuit covers all taxi and limousine companies and drivers working in Montreal, its south and north shore, and in the Quebec City area.

The Quebec government recently signed a pilot project with Uber allowing the company to operate in the province legally under strict conditions.

Taxi companies previously tried to have a judge impose an injunction against the pilot project but failed.

Cloutier said aside from the class action, the taxi industry is taking the government to court to in order to have the agreement signed with Uber declared illegal.

“For our part,” he said, “we are focusing our energies on providing quality service to Quebecers in line with the parameters of the pilot project regulating ridesharing within the province.”