Crews for the Regional Municipality of Wood Buffalo removed numerous barricades erected after heavy rainfall caused flooding in the region that played unwelcome host to the devastating Fort McMurray wildfire this spring. 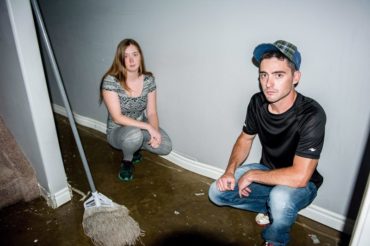 Homeowners Kayla and Kenny Payne pose by the wet and warped baseboards of their basement in the Gregoire neighborhood of Fort McMurray, Alta., on Monday, August 1, 2016, which flooded after heavy rains hit during the early morning of July 31. THE CANADIAN PRESS/Greg Halinda

“Following yesterday’s rainfall, ground support staff from Underground Services and Public Works were mobilized to evaluate conditions in the Urban Service Area,” notes a statement issued Sunday by the municipality.

“Crews have since removed numerous barricades, swept various streets and pumped up pooled water. Crews will continue to monitor the road systems,” the statement points out.

Residents are encouraged to dispose of large water-soaked items in large garbage bins placed at the intersection of Thicket Dr. & Robin Cres. in the Ross Haven neighbourhood. The containers will remain in place until Aug. 8.

The region’s ground support staff will be visiting the neighbourhood and disseminating pamphlets on what to do following sanitary sewer flooding since homeowners may have experienced such flooding.

Residents who experienced basement flooding are also encouraged to contact their insurance provider or the Insurance Bureau of Canada, the statement adds.

“With many residents away for the long weekend, we encourage residents who live in an area that experienced localized flooding to connect in the next week with their neighbours to see if they can help them out,” says Chris Graham, the region’s deputy director of emergency management.

“It’s important that our community continues to be resilient and work together following yesterday’s rainfall,” Graham emphasizes.

An information sheet from Alberta Health Services notes “flood waters may contain risks that can affect your health, including raw sewage and chemical contaminants. Items and surfaces that come into contact with flood waters can become contaminated.”

It is recommended personal protection equipment ­ puncture- and water-proof boots, rubber gloves and a face mask ­ be worn when working with flood water-contaminated material. In addition, a person should bathe or shower using soap and warm water when finished any cleaning activities, the information states.

Among other things, it suggests the following:

“Many materials cannot be reasonably cleaned and dried once they have been soaked with floodwater,” the information explains.

It is further recommended that the following items be removed and discarded, in sealed plastic bags, whenever possible:

This spring, the region experienced the so-called Fort McMurray wildfire, which burned for weeks, caused the evacuation of the entire city and resulted in considerable damage.

Insurance Bureau of Canada reported in early July that the estimated insured damage, based on figures from Catastrophe Indices and Quantification Inc., from the wildfire was $3.58 billion.

The Fort McMurray wildfire toll is, by far, the largest insured natural catastrophe in Canadian history. The natural disaster with the second-highest insured loss in Canada at $1.7 billion ­ was the flooding affecting southern Alberta in the summer of 2013. Total economic losses amounted to $6 billion.