Premium growth in the emerging markets is forecast to increase steadily from an estimated 5.3% in 2016 to 5.7% in 2017 and 6.7% in 2018, according to the report. An improvement in commodity prices and strengthening economic activity will stimulate increased demand for insurance from the emerging regions. Emerging Asia will likely have the strongest growth in non-life premiums, forecast to be nearly 8% in 2017 and 9% in 2018, the statement noted.

In non-life reinsurance, global premium growth is expected to be 2.7% in 2017 and 2.9% in 2018, based on increasing cessions from emerging markets.

Overall, the pricing environment in the global non-life sector remains challenging, Swiss Re noted. “Pricing in commercial lines continues to deteriorate across all regions, but at a slower pace,” the statement said. “In contrast to many other commercial lines, however, rates in cyber insurance continue to harden but at a slowing pace and could level out soon.” 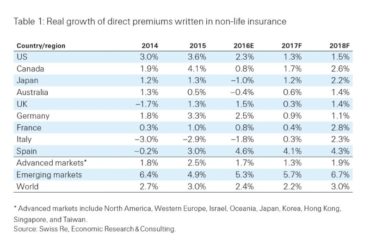 Consider that, according to the report, worldwide cyber premiums have reportedly grown by between 30%-40% per year since 2010. This increased the overall size of the market to an estimated US$2 billion in 2015, “with the majority of the business written against U.S. risks or by U.S. insurers,” the report said.

Increased awareness of the risks associated with cyberattacks and data breaches is boosting demand for related insurance solutions, and represents a significant growth opportunity for the non-life sector, the report went on to say. To date, profitability in non-life has been sustained by low natural catastrophe losses and reserve releases. Assuming average natural catastrophe losses and shrinking reserve releases, return on equity is forecast to decline from 8% in 2015 to around 6% in 2016-18.

“The insurance industry faces headwinds, with moderate economic growth, and still ample capacity in the markets creating a challenging pricing environment,” said Kurt Karl, Swiss Re’s chief economist, in the statement. “Nevertheless, premium volumes continue to grow, in both the advanced and emerging markets along with economic activity and an increase in the insurance penetration rate, particularly in emerging markets.”

More News
Related
Change in exposure driving widening gap between insured, economic losses following disaster events
Canadian non-life insurance market poised for 2017 profit recovery: Fitch
Chubb net income up 149.2% to US$1.09 billion in Q1 2017
Net income for Swiss Re US$1.2 billion in 2017 H1, down from about US$1.9 billion in 2016 H1