Two tornadoes in southern Alberta that damaged homes and vehicles in July have been declared catastrophes by Catastrophe Indices and Quantification Inc. (CatIQ), Insurance Bureau of Canada (IBC) confirmed to Canadian Underwriter Monday.

The July 7 tornado near Bergen and the July 18 tornado in the Redcliff area are both expected to exceed $30 million in insured loss, IBC said.

On Aug. 1, 2022, much of Alberta was struck by hailstorms, including one that produced a record-breaking hailstone. (Any damage from this storm would not be included in the IBC’s damage estimates for Bergen and Redcliff.)

On the afternoon of July 7, severe thunderstorms moved through central and southern Alberta, bringing ping pong-sized hail, funnel clouds and a tornado about four kilometres east of Bergen, Environment and Climate Change Canada (ECCC) said in a weather summary. Homes and structures were damaged as well as many trees by the EF-2 tornado that brought estimated wind speeds of between 180-190 km/h.

The July 18 thunderstorm damaged multiple homes, grain bins and vehicles in the Redcliff area. In Redcliff, nearby Medicine Hat and rural areas, more than 7,600 customers lost power (some for days) after power lines were knocked down. An EF-2 tornado touched down about 10 km south of Redcliff, bringing wind speed of up to 190 km/h. The tornado was followed by a downburst – a strong downward and outward wind system – rated at EF-1 with winds up to 150 km/h, the City of Medicine Hat reported in a statement. 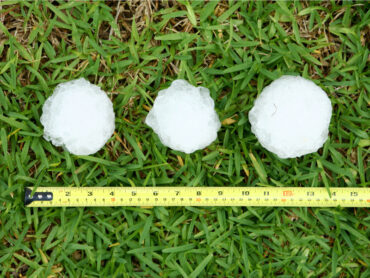 Just weeks after the Redcliff thunderstorm, much of Alberta was hit by severe thunderstorms on Aug. 1. Hailstones largely ranged in size from pea-sized to nickel or tennis ball-sized hail. Innisfail and Milnerton saw baseball-sized hail (7.5 cm), ECCC reported.

Although the hailstorm doesn’t seem to have resulted in that much damage from a claims perspective (one claims adjuster told Canadian Underwriter the storm struck a lightly populated area), it did result in a record-breaking hailstone size.

With a diameter of 123 mm, the hailstone has a slightly larger span than a standard DVD (120 mm).

The Canadian record-breaking hailstone was recovered by the Northern Hail Project (NHP) in Markerville, about 35 kilometres southwest of Red Deer. With a weight of 292.71 grams and a 123 mm diameter, the hailstone eclipsed the previous record-holder, a hailstone weighing 290 grams and 114 mm collected nearly 50 years ago in Cedoux, Sask.

The NHP field team recovered a number of hailstones under a tree canopy, many of which were grapefruit to softball-sized, including the record-breaker. In all, NHP collected seven bags of baseball-sized hail or larger (at least 70 mm in diameter), said a press release from NFP, a partnership between Ontario’s Western University and social impact fund ImpactWX.

NHP executive director Julian Brimelow and some of his severe weather colleagues from around the world maintain a database of record hailstones. Currently, only 22 hailstones, including the Markerville one, have weighed more than 290 grams.

“Finding large hailstones like this is like hitting the jackpot, so this Markerville sample joins an elite club of giant hailstones,” Brimelow said. “This stone will also help us refine our estimate of just how large it is possible for hail to grow.”

Because giant hailstones are so rare, the international research community does not have a good understanding yet of what conditions are required for hailstorms to produce them, NHP added.

“By any measure, Monday’s storm was remarkable,” Brimelow said. “If you were to ask experts where in Canada a new record largest hailstone would be found, they would probably say Saskatchewan. We were expecting significant severe hail in Alberta on Monday [Aug. 1], but not a new national record.”

The previous Alberta record hailstone fell during a tornado in Edmonton on July 31, 1987. That stone weighed 264 grams with a diameter of 104 millimetres.