Organizations representing the actuarial profession in Canada and the United States have reported an Actuaries Climate Index (ACI) value for the summer of 2016 of 1.72, the third-highest seasonal level recorded. 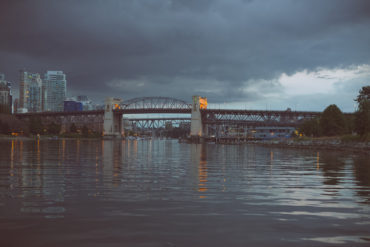 On Tuesday, the four organizations representing actuaries in the two countries – the Canadian Institute of Actuaries, the Society of Actuaries, the American Academy of Actuaries and the Casualty Actuarial Society – updated the ACI, an objective, quarterly measure of changes in extreme weather frequency and sea level.

The ACI is based on an analysis of quarterly seasonal data for six different index components – high temperatures, low temperatures, heavy rainfall, drought (consecutive dry days), high wind and sea level – collected from 1961 to summer 2016, compared to the 30-year reference period of 1961 to 1990. The current five-year moving average for the index is 1.03, the American Academy of Actuaries reported in a press release.

“We have now seen three of the last four seasons having an Actuaries Climate Index value over 1.50, compared to the 30-year reference period, which had no index values above 1.00,” reported Doug Collins, chair of the Climate Change Committee, which developed the index. “The spring and summer 2016 data reflect a continued pattern of increased frequencies of high temperatures and precipitation, and of lower-temperature extremes, compared to the reference period,” he said, adding that data was collected from “neutral, scientific sources” and actuaries have developed these evidence-based results on extreme weather events. 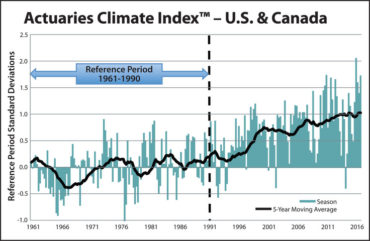 The ACI was developed by the Climate Change Committee, which was formed from a partnership of the four sponsoring organizations. The index is designed to provide actuaries, public policymakers and the general public with objective data about changes in the frequency of extreme climate events over recent decades.

Updates for values will be posted quarterly on the ACI website as data for each meteorological season becomes available. The organizations are also developing a second index, the Actuaries Climate Risk Index, to measure correlations between changes in the frequency of extreme events as measured by the index and economic losses, mortality and injuries.

The ACI was launched on Nov. 30, 2016 as an educational tool to inform actuaries, public policymakers and the general public about climate trends and some of the potential impacts of a changing climate on Canada and the U.S.