Red Deer cleaning up from windstorm after declaring state of emergency

RED DEER, Alta. – People in Red Deer were cleaning up Wednesday after a violent windstorm that knocked out power and prompted the central Alberta city to declare a local state of emergency. 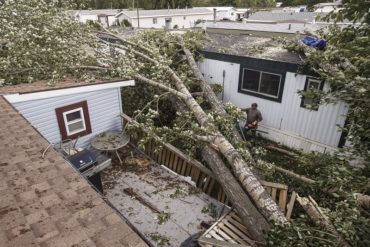 Residents clean up after a storm ripped through the city, in Red Deer, Alta., on Wednesday, June 21, 2017. Hail and wind gusts of 110 km/h pummelled the the city on Tuesday. THE CANADIAN PRESS/Jason Franson

One person suffered minor injuries at a campground but was released from hospital.

People posted images on social media of damage, including part of a roof that blew off a store and landed on nearby parked cars.

Windows were blown out of the local mall and one video showed scenes of people wandering around the darkened building wondering if they had been hit by a tornado.

Environment Canada said Red Deer was hit by one of a number of severe thunderstorms that rolled through the central part of the province Tuesday on the leading edge of a cold front.

Meteorologist Dan Kulak said it was not a tornado. He called it a “low-end severe thunderstorm” and added that such storms happen every year in the province.

Big mess to clean up in Red Deer after last night's storm. More on @ctvedmonton at 7. pic.twitter.com/j2aweXd6uz

“It was not a tornadic event. There is no evidence of tornadoes that we can find,” he said. “There were strong wind gusts across the province. It is not unusual.”

Kulak said thunderstorm watches were issued by Environment Canada just before noon that said conditions were favourable for the development of dangerous thunderstorms that could produce wind gusts, hail and heavy rain.

Environment Canada updated the watch to a thunderstorm warning for the Red Deer area about 7:09 p.m., he said.

Daelyn Hamill of Red Deer put up a picture of a giant spruce tree that had crashed onto the roof of his parent’s home. He urged people to “stay safe out there!”

Another photo showed a semi-trailer that had been pushed onto its side by the winds on the highway between Innisfail and Penhold.

Town officials in Innisfail, 30 kilometres south of Red Deer, were also reporting widespread power outages and said the roof had blown off the town’s curling rink, though an initial assessment said there was no structural damage to the building.

Stronger wind gusts were recorded north of Red Deer as well in the Maskwacis area, while a rail car was reportedly blown off the tracks east of Edmonton.

– With files from CTV Calgary.

Destroyed trees heading north on Gaetz Avenue. I'm so grateful all 100,418 of us are safe. #rdstorm pic.twitter.com/HNxruhbLGg