Regulation: A threat or benefit to innovation?

While there is a perception that regulation is a threat to innovation in the Canadian financial services space, that’s not the case, say executives from a fintech hub.

“[For] any start-up here in Canada, I think there’s a bit of a discussion around how regulation can hurt innovation, but we truly don’t believe that’s the case,” says Elvis Wong, director of financial health with Montreal-based Fintech Cadence. “What start-ups want…isn’t ‘no regulation.’ What they want is clear regulation and guidelines so that they know how to operate and what they can do.”

Wong was part of a discussion on innovation at the Financial Services Regulatory Authority of Ontario’s (FSRA) 2022 Exchange Event in late January. The session was moderated by Marlena Labieniec, director of FSRA’s Innovation Office, which recently released an innovation framework along with a test-and-learn environment. She said the regulator has often heard that regulation is a seen as a threat to innovation and asked for thoughts on FSRA undertaking an innovation facilitation role.

“We believe that regulation is necessary for fintech innovation in Canada, because we want the good players to survive and the good players to thrive,” Wong says. “And if we do know that there’s other start-ups that might not be in the best interest of Canadians, we want the regulators to be able to both encourage good innovation to thrive, and the bad actors to potentially be monitored.”

Layial El-Hadi, executive director of Fintech Cadence, adds that fintechs often hesitate to engage with regulators because they find regulation very complicated. “These are not individuals who know how to navigate compliance,” El-Hadi says. “They don’t necessarily know how to…understand what role regulations might even play.” 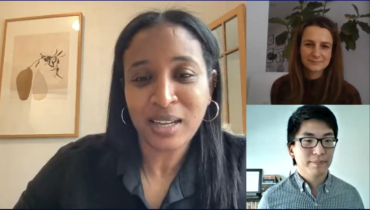 Sometimes fintechs may not only lack a thorough understanding of regulation, but think it comes with a big price tag as well, El-Hadi says. Once entrepreneurs understand that regulation doesn’t necessarily mean they have to hire lawyers or pay for somebody to manage compliance for them, she says, they may be more onboard with the idea.

“With this innovation framework, if it’s implemented the way it’s been designed to, [and] it’s really transparent… I think fintechs would be more willing to engage in the conversation, [and] other stakeholders as well.”

Wong notes ambiguous regulations in the past have hurt Canadian fintechs (not necessarily in Ontario, the insurance industry or FSRA’s domain). “But definitely there’s been quite a few start-ups that we know of that have launched in Canada, launched in Ontario, were successful in getting customers, helping them, but because of unclear regulations around, in their case, open banking…[and] what they can do, they have actually moved to the U.S. to serve U.S. customers.

“Or some of our start-ups have actually shut down because they just felt like they couldn’t operate under that regulatory environment,” Wong adds. “And it was purely because of regulations, not because of customers, not because of funding. The challenge would be just making sure that there is a clarity and guidance for these innovations to happen.”

Sometimes, other stakeholders that could be partners or customers of fintechs will not want to dabble in uncertain regulatory areas, El-Hadi adds.

Dr. Cristie Ford, a professor at the University of British Columbia’s Allard School of Law, says it’s important to recognize that innovation is not, by definition, beneficial across the board.

“To assume that innovation is always going to sort of lift all boats, or is going to be congruent with the kinds of objectives that the regulator wants to see is, I think, not reasonable,” she says during a separate panel at the Exchange Event. “Understanding who’s innovating, in what contexts and for what purposes, is essential.”