Following record heat and a wildfire that burned down about 90% of the village of Lytton, B.C., Canada’s transportation regulator has ordered fire monitoring, suppression, and risk reduction measures for railways to protect against wildfire “in the context of extreme weather conditions.”

Hundreds of wildfires have been raging in British Columbia for weeks. This includes the “unprecedented wildfire” in Lytton on June 30, fuelled by lightning strikes, high winds, and high temperatures (Lytton set the all-time Canadian heat record for three days in a row, culminating in a high of 49.6 degrees Celsius).

The cause of the Lytton fire remains under investigation, but public figures such as B.C. Premier John Horgan have openly speculated that it could have been caused by a train.

Transport Canada issued a ministerial order on July 9 to cease movement of trains between Kamloops and Boston Bar, B.C., for 48 hours. “This was done in the interest of safe railway operations and to protect public safety for the temporary return of residents to inspect their homes in Lytton,” Transport Canada said at the time.

Two days later, Minister of Transport Omar Alghabra issued another ministerial order “to immediately enact precautionary safety measures to further protect against wildfires in the context of extreme weather conditions.” Key provisions include measures for railways to increase their capacity to detect, monitor, and suppress fires.

“The immediate measures described in the order were developed on a precautionary basis, and include targeted speed restrictions, increased equipment inspections, and staging and deployment of additional fire prevention equipment for more rapid response to any fire along the right-of-way,” the ministry said in a statement. “In the coming days and weeks, Transport Canada will continue to work with railway companies, communities, and indigenous groups to further refine these measures based on the results of these consultations.”

Specifically, the regulator said it would work with railway companies to incorporate these fire risk reduction measures on a permanent basis into the existing regulatory framework governing railway operations in Canada. “This work will include, for example, a commitment to leveraging and deploying available technology to detect and monitor for the presence of fires.” 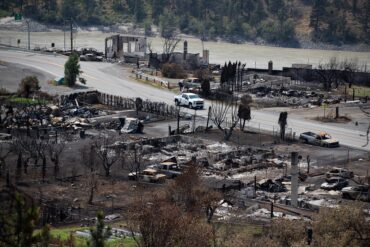 An RCMP vehicle drives past the remains of vehicles and structures in Lytton, B.C., on Friday, July 9, 2021, after a wildfire destroyed most of the village on June 30. THE CANADIAN PRESS/Darryl Dyck

Around the time of the first ministerial order, the Transportation Safety Board of Canada (TSB) deployed a team of investigators “following a fire potentially involving a freight train in Lytton.” TSB is an independent agency that investigates air, marine, pipeline and railway occurrences, but does not assign fault or determine civil/criminal liability.

TSB said it will gather information and assess the potential train fire in Lytton. Also, on July 9, TSB reported it was investigating a fire involving a Canadian Pacific Railway freight train near Sparwood, B.C.

Also, CN and CP must consult with indigenous governments or other indigenous governing bodies located along the subdivisions. This would be to consider incorporating indigenous knowledge related to the presence of fire hazards, fire risk, and control of fires into the preparation of their fire hazard reduction and fire preparedness plans.

The order also requires reduced train speeds when certain air temperatures and fire danger levels are reached. For example, when the temperature is 33 C or higher, and the fire danger level is “extreme,” Class 1 railways must ensure train speeds are reduced to 25 miles per hour where permitted track speed is between 26 mph and 50 mph. The limit would be 30 mph where the permitted track speed is 51 mph or greater.

Further requirements include inspections, and the implementation of an extreme weather fire risk mitigation plan within two months.

Feature image: The remains of the village grocery store is seen in Lytton, B.C., on Friday, July 9, 2021, after a wildfire destroyed most of the village on June 30. THE CANADIAN PRESS/Darryl Dyck