The Reinsurance Association of America is calling on the U.S. government to encourage private-sector insurers to compete with the National Flood Insurance Program, which is scheduled to expire Sept. 30.

NFIP was created in 1968. A property cannot qualify for NFIP coverage unless it is in a community that has joined the NFIP and agrees to enforce certain floodplain management standards. NFIP had a debt of more than US$20 billion last year, and a 2012 law that mandated an increase in rates in some high-risk properties was repealed three years agol

“With the NFIP up for reauthorization, lawmakers should make it easier for homeowners and businesses to purchase a flood policy from private insurers who are eager to offer flood policies for properties across the risk spectrum,” RAA president Frank Nutter stated in a release May 25. “Increased competition from the private sector would not only reduce the NFIP’s size and debt, but would ensure that the federal program remains sustainable for years to come.” 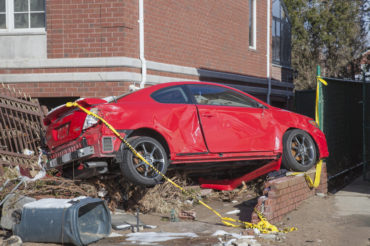 A home and vehicle in Brooklyn, New York, damaged by flood after Hurricane Sandy in November, 2012.

Write-your-own programs account for about 82% of NFIP policies in force, Marsh & McLennan Companies Inc. said in a paper released in 2015. In that paper, titled Reforming the National Flood Insurance Program, Marsh said that under the WYO program, insurers may market, sell, and service NFIP policies “under their own name in exchange for an administrative allowance from the NFIP.

The U.S. government created its National Flood Insurance Program “to provide flood coverage to consumers who were unable to get coverage from the very limited private market,” said House of Representatives member Emanuel Cleaver in January, 2016 of the house committee on financial services, subcommittee on insurance.

At the time, the committee was studying the Flood Insurance Market Parity and Modernization Act, which was passed in 2016 by the House of Representatives. The Senate did not pass that bill before the 2016 election, but it was re-introduced in the House March 8, 2017.

In 2012, the U.S. government passed the Biggert-Waters Flood Insurance Reform Act of 2012. That law – which was repealed in 2014 – required insurance rates for policies under NFIP to be raised, in some cases, to reflect true flood risk.

The Flood Insurance Market Parity and Modernization Act would “remove excessive restrictions and would give states more flexibility to license and regulate private flood insurance,” Republican Congressman Dennis Ross stated in a release this past March.

In 2016, Ross told congress that currently, NFIP policies only cover up to $250,000 of damages related to a residential home.” NFIP “does not cover a homeowner’s living expenses, such as temporary housing, if they are displaced as a result of a flood,” Ross said at the time. “In the case of a business, an NFIP policy does not provide coverage for the financial losses suffered by businesses as a result of a flood.”

As of June, 2016, was “indebted to the U.S. Treasury to the tune of $23 billion, most of which it borrowed after Hurricane Katrina” Standard & Poor’s Financial Services LLC said in a report, titled Privatizing U.S. Flood Insurance: A Trickle-Down Effect, Or Opening Floodgates? “That 2005 disaster alone cost the NFIP $16.3 billion.”

S&P said in the report that NFIP had to pay out US$8 billion in 2012 after Hurricane Sandy, which was downgraded to Tropical Storm status before it made landfall about 200 kilometres south of New York City.

The Flood Insurance Market Parity and Modernization Act “says we all agree that there is more role for private insurance and we should remove any barriers that might be there so that people can be better served and have better competition,”

Boston-area Congressman Michael Capuano said in 2016 during hearings on the bill.

“I think this bill does a pretty good job doing that,” Capuano added at the time. “I don’t think private insurance is ever going to – I am not sure that is possible, but it is a different debate – take the place of national flood insurance.”