The potential for procrastination to address the consequences of a large earthquake in Canada are persistent and pervasive, demanding implementation of a tactical plan that could see “the issue dealt with, one way or another, in the next 12 months,” Senator Scott Tannas argued Wednesday during an industry event in downtown Toronto.

At every turn – for both the property and casualty industry and government – “I submit that we have enormous potential for procrastination,” said Tannas, keynote luncheon speaker at MSA Research Inc.’s Canadian Insurance Financial Forum (CIFF).

“I don’t think that we will ever see a solution if we wait for the government to proactively try and solve this problem for us. It’s that simple,” emphasized the founder and vice chairman of Western Financial Group Inc.

There is strong evidence the so-called “big shake” – likely in B.C.; possibly in Quebec of a magnitude and location where the financial damage would produce overwhelming losses for insurers – “threatens our country’s entire financial system,” Tannas said.

“In aggregate, the whole of the industry could likely handle a $20 billion event. This is roughly where insurers are prepared with capital and reinsurance resources today,” he explained.

Losses in the $30 billion to $35 billion range, however, could produce widespread insurer default, and higher numbers would bring contagion to the Canadian banks, businesses and the national economy, Tannas told attendees.

Consider, however, that recent Cat models have generated losses from a big shake of as much as $95 billion, “400% from what current industry capacity is.” 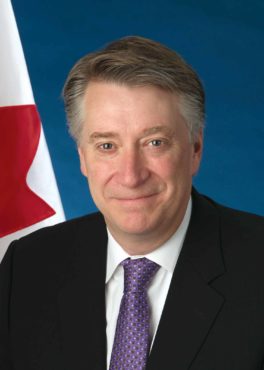 Should that be the reality, stakeholders would be well-advised to remind themselves “almost every major disaster in the last decade has brought about changes and upward estimates because we have underestimated consistently the damages caused by catastrophes,” he cautioned.

Developing a staged tactical approach “puts the onus on our industry and our leaders to propose a clear and detailed plan that is fair to all stakeholders,” Tannas (pictured right) told attendees.

The plan to get the big shake issue “onto the agenda and see the issue dealt with one way or another in the next 12 months” would involve a number of steps.

Plan B could take many forms, Tannas noted. Some possibilities include PACICC exempting insolvencies caused by quake; insurers opting out of PACICC; insurers making no changes; and insurers deciding to no longer provide quake coverage.

“The answer could be, ‘If we don’t get this, we can’t offer earthquake insurance anymore. We can’t bet all of our shareholders’ money, all of our employees’ employment, all of our national policyholders’ coverage on 15% of the population and less than 1% of the geographic territory of the country,’” Tannas suggested.

“That sends a signal to the federal government that says, ‘Well, if that happens, I’m on dollar one of claims to deal with earthquake damage,’” he told attendees.

A number of excellent studies and reports have been written detailing risks associated with a big shake quake, Tannas said. This includes the C.D. Howe study authored Nicholas Le Pan, current senior fellow at the institute and former OSFI superintendent.

Le Pan proposed a financial mechanism that – after a certain point of financial stress in the industry – would trigger a government-sponsored financial backstop that insurers could access and continue to pay claims, Tannas synopsized.

“This proposed solution represents, in my mind, a very clear-eyed acknowledgement that the big shake risk is one that our industry simply cannot mitigate itself,” he said.

Therein is a major hurdle to clear.

“I submit to you that this situation is the perfect recipe for many, many more years of talk, study and inaction. Why? Because our current situation features prominently the most beguiling force for inaction: the ability to procrastinate – procrastination by industry and procrastination by the government,” Tannas argued.

As it stands insurance industry leaders could choose to wait out the problem, leaving it to the next leader to address; politicians could choose to ramp up efforts following big shake’s possible inclusion in the anticipated 2019 federal financial regulatory review (already delayed from 2017), he told CIFF attendees.

“But, colleagues, this is folly,” Tannas said. Noting that a federal election is scheduled for 2019, “any recommendation coming out of a financial review, if it isn’t being postponed again because of the election, will not be actioned by this government.”

Instead, he noted, the task will fall to a new government fresh from the campaign trail, with promises to fulfill.

“The new government will not likely be placing an implementation of a financial system review at the top of the agenda,” Tannas argued. As well, the bureaucracy “will also be tempted with procrastination,” he said, noting that “after all, this backstop mechanism solution is essentially an advanced plan to bail out the insurance industry.”

The issue is “complex, needs to be taken seriously, and the solution needs the kind of details that require a lot of thought, negotiation and consultation. It’s obviously extremely potentially expensive and, ultimately, legislation will have to be championed by politicians within the government and especially the minister of finance,” he said.

Procrastination is made all the more attractive by that fact that “while there may be a concern, there is no immediate crisis and, therefore, there will not be any pressure ever to resolve this issue in advance, especially if the industry continues to sell earthquake insurance and shoulder the risk,” Tannas told attendees.

“I believe it has a solid chance of success,” Tannas said of his proposed approach.

“But even in failure, it will create an atmosphere in which each individual insurer can determine their own best course of action to protect customers, to protect shareholders and employees, without waiting and hoping for a solution that likely will never materialize,” he emphasized.