Remember that messy Halloween storm? This is how much it cost insurers

Heavy precipitation that fell across central and eastern Canada as kids were out trick-or-treating was part of a storm system that caused over $250 million in insured damage, according to Catastrophe Indices and Quantification Inc. (CatIQ). 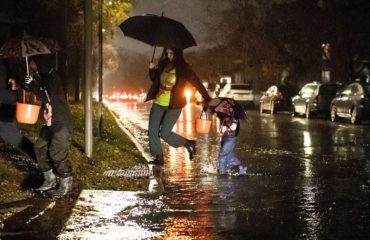 A child walks into a giant puddle as people go trick or treating in the rain on Halloween in Ottawa, on Thursday, Oct. 31, 2019. THE CANADIAN PRESS/Justin Tang

The storm from Oct. 30 to Nov. 1 saw significant rainfall and damaging winds cause power outages, leaving nearly one million Hydro-Québec customers without power. The Niagara and Montreal areas were the hardest hit, both in terms of wind and water damage, IBC reported.

Heavy precipitation was widespread across southern Quebec. The most rainfall occurred in the Eastern Townships: Stratford received 109 millimetres and Sherbrooke 93 mm. Quebec City received 71 mm, and Montreal and Laval both recorded 63 mm. In Ontario, rain, snow and high winds brought over 60 mm of rain to Cornwall and 17 cm of snow to Sudbury. Val-d’Or and Chibougamau in Quebec recorded 19 and 30 cm of snow, respectively. Newfoundland and Labrador also received heavy amounts of precipitation. The highest amount recorded in the province was 82 mm in Cow Head. Goose Bay, Labrador, recorded 24 cm of snow.

Kim Donaldson, vice president of IBC’s Ontario region, noted that severe weather events driven by climate change are happening more regularly and with greater strength. In particular, heavy rainstorms that cause flooding are becoming more common. “While the insured damage from these storms is significant, the total economic cost to homeowners and governments is even greater,” she said.

According to Aon’s Global Catastrophe Recap report for November, released Friday, total economic losses from the storm system were estimated at up to Cdn$365 million, with most damage costs covered by insurance. Aon confirmed some of the hardest hits areas were in Quebec and Ontario, notably to residential structures and vehicles.