Renting out backyard swimming pools can be lucrative, but experts warn of risks

CALGARY – Stephanie Sabela didn’t know what to expect when she first decided to list her backyard swimming pool for rent on the popular online platform, Swimply.

Sabela, who lives on a five-acre property north of Toronto in King Township, saw an online ad for Swimply back in June. On a whim, she decided to advertise her saltwater pool – complete with access to lounge chairs, barbecue, and pool toys – on the platform’s website.

“After a week and a half on the site, I had like 200 requests,” Sabela said. “I signed up for a lark. And then it was like a second job. I couldn’t keep up.”

Like Airbnb but for swimming pools, the California-based Swimply provides a forum for homeowner “hosts” to rent out their backyard oases by the hour. Sabela started out charging $100 an hour on the site, and quickly upped it to $200 as she learned that pandemic-weary city-dwellers would pay good money for the chance to escape for an hour or two to a private piece of paradise.

Sabela’s experience is not unique, said Sonny Mayugba, Swimply’s vice-president of growth. While most of the forum’s hosts are located in the U.S., Swimply has 500 listings in Canada – and some of those pool owners are generating significant income, Mayugba said. 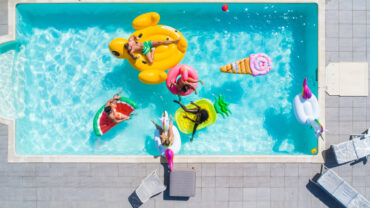 “We’re seeing evidence that there’s plenty of hosts who can make six figures, no problem,” Mayugba said. “Right now we have hosts who are clearing well over $100,000 for the season.”

But while renting out a private pool can be lucrative, experts say anyone considering it – either through Swimply or some other platform – should think long and hard before taking the plunge.

Darcy Merkur, a personal injury lawyer with Thomson Rogers law firm in Toronto, said the $1 million in liability protection offered to hosts by Swimply amounts to “peanuts” in the unlikely event a pool rental results in a serious injury or death.

“If I was consulted by someone who was injured at a swimming pool, I would sue the homeowner,” Merkur said. “It doesn’t matter if they have an airtight rental agreement, we would absolutely implicate the homeowner … and those cases are often quantified in the $10-million range.”

On the Swimply platform, some hosts require renters to sign a waiver ostensibly releasing them from all responsibility. Merkur said waivers can help in the event of a lawsuit, but they aren’t bulletproof.

“Lawyers like us get around them all the time,” he said. “Renting out your pool, as a side hobby, is not advisable from a liability perspective at all.”

In addition to liability coverage, Swimply offers $10,000 in property damage protection in case a host’s pool or property is damaged. The company – which takes a 15 per cent cut of whatever hosts earn – will also direct hosts to local lifeguards or swim instructors for hire, if that’s something homeowners want for extra peace of mind.

Mayugba said the protections offered by Swimply are comparable to other best-in-class hospitality brands, though he acknowledged some level of “personal responsibility” comes into play for users of the platform.

“For the host, we say ‘your pool, your rules,’” Mayugba said. “We do advise certain things. The pool needs to be safe, it needs to be clean. The chemicals have to be right … but there is some level of personal responsibility.”

It’s a philosophy Sabela agrees with. She has never asked guests to sign a waiver, and she brushes off friends’ suggestions that renting her pool to strangers may be unwise.

“I’ve looked at some other people’s pool listings and I see all sorts of waivers and warnings,” she said. “I don’t bother with that, because I assume people know they’re responsible for their kids and stuff like that.”

Sabela said her experience so far with Swimply renters has been universally good, except for one guest who brought more people than agreed upon. In fact, her chief worry right now is not the risk of property damage or being sued, but of not being able to keep up with demand.

“It’s been so incredibly popular that now I need more maintenance, I need more cleaning, I need more pool chemicals,” she said. “It disrupts our routine and our schedule because we always need to be home when there’s a booking. So it’s been great, but it also really infringes on your life.”

3 Comments » for Renting out backyard swimming pools can be lucrative, but experts warn of risks