FORT MCMURRAY, Alta. – Residents returning to their homes in Fort McMurray are tackling stinking refrigerators and grass grown tall and infested with dandelions as the fire-scarred city slowly springs back to life. 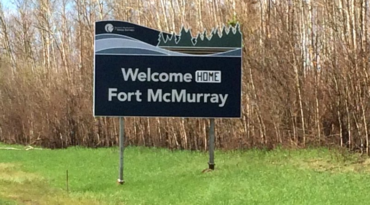 Billboards that read “Safe Resilient Together” and “We Are Here. We Are Strong” greeted people as they drive into Fort McMurray. Photo: @PeaceHillsIns.

A steady stream of traffic is moving into the northern Alberta oilsands hub as thousands who fled a wildfire a month ago return to see what’s left.

Fenton Lovell says he cried as he drove in and his eyes teared up again when he opened his fridge.

He’s getting the house cleaned and ready so his wife and twin babies can return from Newfoundland. After boosting the dead battery in his pickup truck, he grabbed a welcome kit out of his mailbox and put a sign reading “natural gas required” in his front window.

Pilar Ramirez spent the night sleeping in the back of a truck in Anzac, about 40 minutes southeast of Fort McMurray.

She got to work cleaning as soon as she got into her downtown house, which she shares with co-workers at a concrete company.

The grass is long and there are multiple re-entry information booklets hanging on doors. #FortMcMurray pic.twitter.com/rCQo8HrlHY

LOOK HOW TALL THE GRASS IS! My mom just happened to fertilize before the 4wk evacuation. #ymmfire pic.twitter.com/pmEx9OgamY

Her reaction when she first opened the door: “Oh, it’s so disgusting!”

“It smelled terrible, the food. Flies everywhere – and big ones. I said, ‘Oh, my God, what happened here?’”

'It's overwhelming being back, I'm so happy to be back.' #YMM couple still smiling despite smelly house #YMMHome https://t.co/dMeFlnMch6

Jay is taking out his fridge, there's already a smell and he doesn't want to open it. Will leave in lawn #ymmfire pic.twitter.com/YxUbkCpLiB

Until further notice, curbside fridges and freezers will be collected daily until 3 pm. Pls DO NOT put them outside after 3 pm #ymm #ymmfire

One of Mike Maloney’s first tasks was to mow the messy lawn in front of his home while his wife and three kids cleaned inside.

“Everybody’s happy but… it’s sad to see what did burn and some loss there. It’s tragic for those people. But I think, all in all, everybody will survive.”

Welcome home, #ymm. The insurance industry has over 1,400 people mobilized and ready to help. Find us in Info Centres. @RMWoodBuffalo

People driving in on the only highway into the area have found the forest on both sides blackened about half an hour out of town. The devastation is apparent from the road just inside city limits and a strong smell of smoke hangs in the air.

#FortMcMurray Read this booklet to be prepared for re-entry once authorized by @YourAlberta https://t.co/0cYBesVNkV pic.twitter.com/Zsl2rwbhbt

Billboards that read “Safe Resilient Together” and “We Are Here. We Are Strong” greet people as they drive in. A huge Canadian flag hangs between the extended ladders of two fire trucks parked on a bridge over the road.

The fire destroyed 2,400 structures, nearly 10 per cent of the city, when it ripped through last month and forced more than 80,000 residents to flee.

Unreal how one house is untouched and the other just rubble. @weathernetwork #ymmfire #FortMcMurray @debmatejicka pic.twitter.com/f7b3Vjq4md

Bob Couture, director of emergency management for the Wood Buffalo municipality, said he expects between 14,000 and 15,000 people to return Wednesday – the first day of what organizers have planned as a staged re-entry.

“It’s going to be an emotional event when we have those first cars pulling back into the community, because we can all remember when this community left on the evacuation. It was pretty dramatic, but now it’s going to be, hopefully, a joyous event,” Couture said Tuesday.

The Red Cross is prepared to bus in as many as 2,000 residents who don’t have their own cars. Donations to the relief agency sit at $112 million, but officials plan to update that figure this week.

Returning residents are being warned that it won’t be business as usual and to bring with them two weeks worth of food, water and prescription medication as crews continue to work to get basic services restored.

Crews have been working to get critical businesses such as banks, grocery stores and pharmacies running again. Supplies of some items may be limited in the beginning and the government says some things may need to be rationed.

Bob Couture says they want to ensure we have a safe return to Fort McMurray #ymm #ymmfire #rmwb pic.twitter.com/UXovcYurXQ

“We would not do this if it was not safe to do so,” Couture said.

The re-entry is happening in phases this week. Only people in the Lower Townsite, Anzac, Fort McMurray First Nation and Gregoire Lake Estates are being allowed to come back on Wednesday.

The RCMP say they will have a helicopter in the air to monitor traffic and police kept a close watch on the speed of drivers as they headed home.

Alberta Premier Rachel Notley was planning to be in Fort McMurray when the first evacuees return.

“We’re still with them, and I think it’s really important that they hear that from us.”

Thank you to everyone helping out at the info centres; you’re amazing and we couldn’t do it without you #ymmstrong pic.twitter.com/zRnavg9UDN

These pink notices were placed on the doors of homes adjacent to burned out properties. #ymmfire pic.twitter.com/AOJYtArGSI

They've already done so much, and these first responders are now welcoming #ymmfire evacuees, home. pic.twitter.com/u2e4KosPVD

#RCMP addressing re-entry Members will focus on assisting with traffic as people move back into city . #FortMcMurray pic.twitter.com/MBXyRuQzFj

The protective layer of spray really seems to be keeping debris and smell in. This is Wood Buffalo. #YMM #ymmfire pic.twitter.com/QzNI1O9HVB

Homes and cars gutted in the #ymmfire. Crews in facemasks in the background working to secure area. pic.twitter.com/vNX4iPNcSn

Photos here and in previous tweet are from Timberlea. #ymmfire pic.twitter.com/dhEWJv7JCv

One of the Thickwood houses that was damaged in the #ymmfire, possibly in explosion afterwards. pic.twitter.com/DsOjPMLUaC

The mass disposal of fridges has begun. #ymmfire pic.twitter.com/vp7iOm1FuZ

Workers trying to bring Superstore back into shape #ymmfire pic.twitter.com/bbelJZWGBo

The Peter Pond mall is getting its ducts cleaned #ymmfire pic.twitter.com/wI8FJ3bKps