The government of British Columbia announced on Tuesday a series of improvements for the taxi industry in anticipation of “ride-sharing services coming to British Columbia by the holiday season at the end of 2017,” including improving certain insurance products, potentially saving taxi drivers up to 25% in premiums. 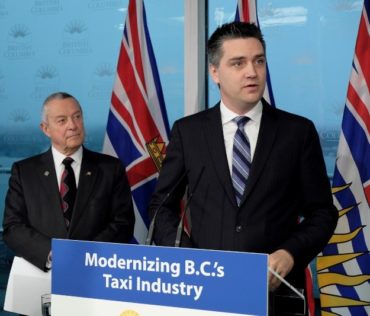 The Ministry of Transportation and Infrastructure said in a statement that it plans to introduce a series of improvements to help the taxi industry modernize and remain competitive in anticipation of ridesharing services by the end of the year.

Transportation and Infrastructure Minister Todd Stone and Peter Fassbender, Minister of Community, Sport and Cultural Development and Minister Responsible for TransLink, announced the improvements. Among the proposed improvements “that will help ensure a level playing field in B.C.”: 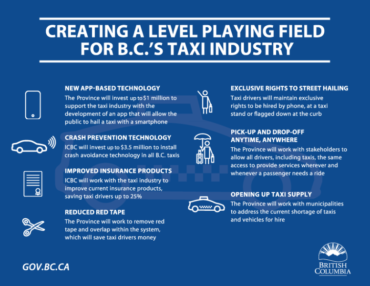 In addition to these improvements, the ministry said in the statement that the province will require the same safety standards for both taxis and ridesharing providers. As part of this, Class 4 licenses will be phased out for taxi drivers, and taxi and ridesharing companies will be responsible for maintaining records that prove:

The province will also “make sure that appropriate safeguards are in place to protect consumers through fair and transparent pricing,” the statement said.

The proposed improvements are the result of extensive feedback and consultation with stakeholders throughout the province, including the taxi and limousine industry, local governments, business associations, accessibility groups and transportation network companies, the transportation and infrastructure ministry reported.

Beginning this summer, government will seek additional input from taxi drivers, the ridesharing and taxi industries, police, airports, municipalities, ICBC and RoadSafetyBC as the province finalizes its plan in time for the 2017 holiday season.

“British Columbians have told us that they want ridesharing services, and we’re moving forward to make it happen,” Stone said in the statement.

Andrew Murie, the CEO of Mothers Against Drunk Driving (MADD) Canada, called on all political parties to commit to implementing workable ridesharing rules this year. “Mothers Against Drunk Driving supports the province’s decision to allow drivers with class 1-5 license to drive taxi and rideshare, as this will increase safe options for British Columbians,” Murie said.