HALIFAX – Legislators on both sides of the Nova Scotia-New Brunswick boundary say efforts to safeguard their area from a potential climate disaster have dragged on too long.

An engineering study commissioned to develop “three viable solutions” to the risk of the 35 kilometres of dikes being overwhelmed on the Chignecto Isthmus, which straddles the boundary, was expected in the spring but still hasn’t been released.

Meanwhile, an Oct. 15 deadline for seeking Ottawa’s help under the disaster mitigation and adaptation fund for such projects has passed.

Elizabeth Smith-McCrossin, the Independent member of the legislature for Cumberland North – the Nova Scotia riding on the provincial boundary – said in an interview Wednesday that she is preparing a private member’s bill that would call on the new Progressive Conservative government to commit to funding Nova Scotia’s share of a solution.

“Even though the past (Liberal) government said it was a priority, there isn’t any money allocated for it, and it’s going to take significant dollars,” she said.

“I don’t know the real cause of the delays. But as a member for the area, I’m asking for it to be made a priority, and soon.”

Megan Mitton, the Green Party member representing the New Brunswick riding of Memrancook-Tantramar, also said the delays are unacceptable given the risks to about 20 kilometres of rail line, highway, energy and communications infrastructure in the low-lying region that connects the two provinces. 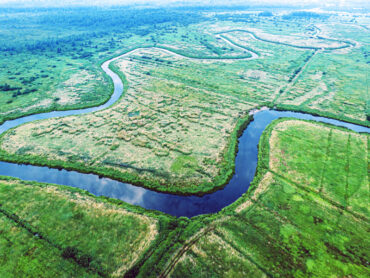 “We don’t want to end up with a situation where whole communities have been flooded, sewage lagoons damaged and people are displaced,” she said in an interview. Mitton’s riding includes the community of Sackville, which has key infrastructure, including a sewage treatment plant, protected by the dikes.

Experts have for decades warned that the combination of a high tide with a powerful storm up the Bay of Fundy could overwhelm aging dikes and flood large portions of the Amherst, N.S., area, as well as neighbouring Sackville. Meanwhile, the sea level at the mouth of the Bay of Fundy has been rising at a rate of about 2.4 millimetres a year over the past century, even as the dikes and coastal land continue to subside.

In 2019, Real Daigle, a meteorologist who models sea level rise, told The Canadian Press the dikes could be breached by a once-in-a-fifty-year storm occurring during the period of highest tides and with sustained winds gusting to 80 kilometres per hour over the Bay of Fundy – potentially adding 40 to 50 centimetres to the height of the water.

The New Brunswick government has taken the lead on overseeing the engineering study being funded by Ottawa and the two provinces, but it did not provide an official for an interview.

“The Department of Transportation and Infrastructure was waiting for the federal cabinet to be sworn in. We look forward to working with our counterparts in Nova Scotia and the new federal cabinet on this project,” Jeremy Trevors, a department spokesman, wrote in response to a request for an interview with the lead engineer.

In Nova Scotia, the Progressive Conservative government’s new Environmental Goals and Climate Change Reduction Act, which was tabled Wednesday, doesn’t include a specific mention of a fix to the Chignecto Isthmus in its list of goals.

Tim Halman, Nova Scotia’s minister of Environment and Climate Change, said the risk of flooding at the isthmus is a “major issue impacting the province” but offered no details on when the study might be completed.

Jeff Ollerhead, who teaches coastal geography at Mount Allison University in Sackville, said in an interview that governments have long known how to protect the low-lying communities and could have proceeded with an analysis of the dikes section by section.

He said options include raising and reinforcing the dikes; removing the dikes and restoring salt marshes; and relocating infrastructure such as highways and the rail line to higher ground.

He argues that a strategic plan for the dikes, including close consultations with the communities involved, should have been underway years ago.

“You have to get on with the work of deciding on a kilometre-by-kilometre basis what options are going to apply to each section of the dike,” he said.